Biara was a succubus in the Heroes of Might and Magic V: Hammers of Fate video game who played a central role in the overall plot of the game. She was a succubus in service of the Demon Sovereign Kha-Beleth, and formerly affiliated with Agrael. She was notable for her disguise skills, which allowed her to impersonate a number of important figures during Queen Isabel's War.

Biara was a succubus who was sent, by orders of Kha-Beleth, to aid Agrael in his trial. She sent him the reinforcements, but did not tell him her name. When Agrael was sent to the Griffin Empire, Biara followed him to play a trick on Isabel. When Nicolai ordered Isabel to return to Summer Palace, Biara killed Beatrice and disguised herself as her. 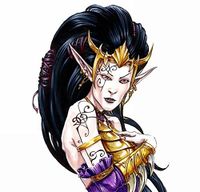 Biara as the dark elf Shadya

While Agrael viewed Biara as his accomplice at the time, she was actually spying on him, and eventually made Kha-Beleth aware of his treacherous plans.

Arriving at the Summer Palace before Isabel and Godric did, the duo assassinated Abbess Beatrice, allowing Biara to pose as her, a figure Isabel trusted. "Beatrice" pretended to have called for military reinforcements from Irollan, but instead lured Isabel into a trap, allowing Agrael to capture her.

Following Agrael's defeat, Biara accompanied him and the remains of his troops to King Nicolai's tomb, and then to Irollan when Agrael heeded to Tieru's call. However, as she attempted to attack him during the Rite of True Nature, Agrael used the Heart of the Griffin, taken by him from Nicolai's body, to banish the traitorous succubus back to Sheogh, thinking he destroyed her for good before Tieru corrected him.

This was only a small setback for Biara, and soon she once again came to Agrael, now known as Raelag, the clanlord of the Shadowbrand Clan of Ygg-Chall, under the guise of a dark elf, Shadya. While following Raelag all the way to the lands of the Griffin Empire, Biara took a detour to Irollan, where she killed Tieru and stole the scroll that could be used to perform the Rite of True Nature on Isabel, which would cleanse her of Kha-Beleth's taint. However, Findan cornered her and swore that he would not harm her if she returned the scroll to him, which she did.

As Shadya, Biara participated in the siege of the Empire's capital city, Talonguard, and was present when the wizard Zehir attempted to perform the Rite of True Nature on Isabel. However, using the Heart of the Griffin, Shadya escaped to Sheogh with the unconscious queen. The Heart was left behind, allowing Zehir to manipulate it to send himself, Godric, Findan and Raelag, along with their armies, into the Demon Sovereign's domain in an attempt to free Isabel before she would give birth to the Demon Messiah.

Saint Isabel and the Red Church

With the assault on Sheogh finished, Biara assumed another disguise, this time of Isabel herself. Returning to the Empire with Godric, "Isabel" declared herself a saint and founded the Red Church, headed by the fanatical Archbishop Alaric. So began her reign of terror, as she did not hesitate to crush any rebellious lords opposing her rule. Godric himself was imprisoned for his "dangerous" mindset soon after his daughter Freyda was sent to quell the rebellion and retrieve the heir to the Griffin dynasty, Prince Andrei Griffin.

Meanwhile, Biara used her guise of Shadya again to approach Thralsai, the leader of the Soulscar clan of Ygg-Chall, and turn him back to demon worship. Incited by Shadya, Thralsai started a new civil war in Ygg-Chall, exploiting Raelag's disappearance, and at the same time turned against the dwarven kingdom of Grimheim. With the Empire; or, more specifically, Laszlo, also provoking a border conflict with Grimheim, each of the three neighboring countries was soon caught in a war on two fronts.

Although the new red-clad army of the Griffin Empire was soon beaten out of the dwarven lands and Laszlo ended up dead, and Freyda defected to the rebellion, Biara successfully manipulated the rebels into killing King Tolghar, leaving the dwarves leaderless. Ygg-Chall and Grimheim lay in disarray. Furthermore, with Alaric's help, Biara found Prince Andrei and sacrificed him, changing the nature of the Heart of the Griffin so that it would summon demons to Ashan instead of banishing them to Sheogh.

When Arantir, fighting the demonic corruption in the lands of the Empire, captured Flammschrein and broke the crystal that held a portion of Isabel's soul, Biara's illusion was shattered, and the "Red Queen" appeared before the astonished Alaric in her true form as a succubus. Alaric, driven insane by this revelation, fled the scene, and Biara's inability to change her appearance forced a change of plans. With the Heart of the Griffin, she opened a way for the demons of Sheogh to teleport directly into Talonguard, allowing them to roam the land.

The demon reinforcements, however, ultimately only delayed Biara's downfall. With Zehir exposing the demonic presence in the Empire, the Red Church turned away from its "saint". Soon, the alliance of five armies, led by Zehir, Wulfstan, Ylaya, Freyda and Kujin, freed Talonguard from the forces of Sheogh, and the real Isabel killed her impostor on the spot.

Tribes of the East

The Will of Asha

To Honour Our Fathers

Flying to the Rescue