She graduated from St. Thomas University with a Bachelor of Arts degree in 1997. She appeared in at least two productions at the St. Thomas Theatre, Seven Menus and The Kitchen.[3]

Initially known for her work on the Nicoderm Canadian commercial as Deb, a flight attendant trying to quit smoking, she has since guest-starred in Being Erica and currently plays the starring role of Bo in the Canadian television series Lost Girl, on the Showcase Channel in Canada. In that series, her character is a Succubus.

Anna was born in Fredericton, New Brunswick,[4] the daughter of Ilkay Silk, a prominent actor, director, producer, playwright and educator in Fredericton;[5][6] some of Anna's earliest memories were going to play rehearsals and watching her mother work.[7] She graduated from St. Thomas University with a Bachelor of Arts degree in 1997.[8] She appeared in at least two productions with Theatre St. Thomas, Seven Menus and The Kitchen.[9]

Silk is noted throughout Canada for playing Deb, a bitterly angry and overstressed flight attendant attempting to quit smoking in a NicoDerm nicotine patch TV commercial.[4][8]

She moved to Toronto to further her acting career in November 1999. Since approximately 2008, Silk has resided in Los Angeles, and landed the role of Bo, in the Canadian television series Lost Girl.[8][7]

She met actor Seth Cooperman at an actor's workshop in Los Angeles.[10] They were reported to be engaged in August 2009,[11] and have since married in a ceremony held in Fredericton.[12] Silk, who was not raised with organized religion, converted to her husband's Jewish religion.[10]

On the January 6th, 2013 Lost Girl series special Lost Girl ConFAEdential, it was revealed that Anna was expecting her first child, and according to an interview in US Magazine, she was expecting in May 2013. On May 1st, 2013, she announced the birth of her son Sam on her official Twitter feed.[13][14] 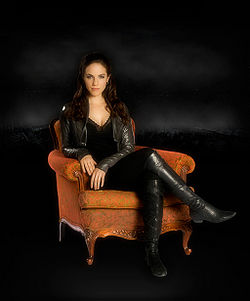