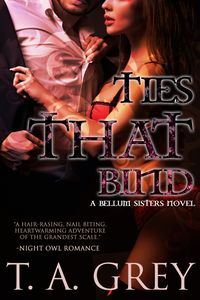 Ties That Bind Revised eBook Cover by T. A. Grey

Ties That Bind is a novel written by T. A. Grey. It is the third work in the Bellum Sisters series by this author. In this work the character Lily Bellum is a Succubus.

Lily Bellum keeps many secrets, even from those she loves the most. With a determination and mindset that only she can help the demon Telal Demuzi—she sets off to join him in his cause for demon's rights, whether he wants it or not. But things don’t seem to go right from the beginning. To say he’s resistant to her charms is putting it lightly, but Lily is not one to back down or give in easily. She pursues Telal, slowly breaking down his incredible defenses one smile, kiss, and touch at a time.

Telal’s years of planning are finally coming to fruition—to open the rift. Once a betrayer of his people, now he’s determined to fix the past. But one man stands in his way; one man who’s turned out to be a dark and sinister version of the boy he once knew. His plan to open the rift is met with hostility, resistance, and bloodshed unlike he’d ever thought possible. Telal finds that losing himself in the sweet body of Lily Bellum proves an excellent treatment to the chaos around him. Together, Telal and Lily get wrapped up in a world of dark magic, love, betrayal, and murder in the greatest journey of their lives.