From SuccuWiki - The Wiki of the Succubi
Revision as of 08:38, 3 August 2016 by TeraS (talk | contribs)
(diff) ← Older revision | Latest revision (diff) | Newer revision → (diff)
Jump to navigation Jump to search

She's a Man Baby! A Man! was the fifth episode of the second season and the twenty-seventh overall episode of the American television series Charmed. It was first shown on November 4, 1999. The series was about the Halliwell sisters who discover they are descendents of a line of female witches. The series follows their adventures to fight demons, warlocks, and other evils. 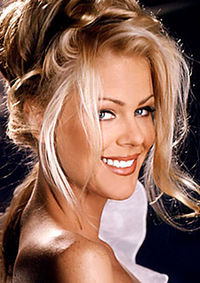 The sisters discover that Phoebe is psychically linked, through her powers, to a man-killing demon known as a Succubus. In order to lure the Succubus to the sisters, Prue casts a spell, which transforms her into a man. Meanwhile, Piper discovers from a video tape at the dating service that their new neighbour, Dan, is interested in her.

San Francisco is in the fourth day of a heatwave, and Phoebe is burning up, but not from the heat. She tells Piper that she doesn't feel sick, only aroused. She tells of a sex dream she's had for the last three nights; it feels different somehow and she's with a different man every night who she ends up killing. "Extreme sexual frustration," Piper tells her, "trust me, I know." Later that night, Phoebe experiences her dream again, before waking up with a start. The following day, Prue is at Bucklands, where she tries to start a conversation with Alan, her date from the previous night. She was frustrated after their date because, despite giving out all the signals, he just dropped her off. She asks if anything happened on their date and he tells her he'll call her. This, Piper reckons, is the kiss of death. Morris shows up and tells Prue that four men have been killed in the four nights since the heatwave started. He knows she's got a secret, but doesn't want to know what it is, he just wants her to help. He shows Prue photos of the victims. All four died of a severe cerebral trauma, were drained of testosterone and were members of the Fine Romance dating service. He tells Prue that he's getting some pressure about the case and that it can't turn out to be unexplained.

At the Manor, Phoebe is relating her dream to Piper - explaining that it felt real. Prue returns with the photos Morris gave her and Phoebe recognises the victims from her dreams. Piper suggests she's gained a new power while Prue believes Phoebe's got a psychic link to the killer. Prue suggests Phoebe go to the dating agency. Morris and his temporary partner are staking out the dating service and taking photos of everyone entering, including Prue and Phoebe. Once inside, Phoebe announces that Prue wants to join. Exploring the place, Phoebe bumps into Owen Grant and has a premonition of him and the killer.

Back at the Manor, Piper has spent more time watching Dan washing his car than researching in the Book of Shadows, but she's able to tell her sisters that the killer is a sexual predator called a Succubus. Prue offers to cast a spell to attract the Succubus to her; if Phoebe turns out to be the killer then at least Piper can freeze everything. The sisters cast the spell in the attic. As the spell ends, Phoebe is relieved to find out that she is not the succubus. "I'm okay," she declares, but a strange voice says, "I'm not." It is revealed that Prue, has been transformed into a man by the spell. Later, Piper and Phoebe are trying to persuade Prue to come out of the bathroom. She says she won't, not unless Piper reverses the spell. Piper refuses, saying that innocent men will die if she doesn't remain as a man temporally. Eventually they manage to coax Prue out, only for her to shut herself away again due to Piper and Phoebe finding the whole thing funny. Phoebe then suggests that she sign up with the dating service in order to attract the succubus.

Having finally gotten Prue to come out again, Piper and Phoebe suggest she needs to practice her walk as a guy, but she isn't very successful. The doorbell rings and Phoebe suggests that Prue answer it, telling her to try to act like Tom Hanks. The visitor is Dan, who wants some ice. Piper introduces Prue as her friend Manny Hanks, who Dan thinks looks familiar. "I'm the brother they never had," 'he' replies. In the meantime, Phoebe has had a vision and tells Piper that she's seen egg sacs and that she thinks the succubus is pregnant. Meanwhile, Dan and Manny discuss Piper and whether she's dating anyone. Throughout the conversation, Manny copies Dan's mannerisms before he's packed off with the ice.

At the dating service, Manny makes a tape. "You're really in touch with your feminine side," the camerawoman notes. Meanwhile, Piper and Phoebe ask about Owen. Darla suggests they join and review his tape, but Piper just freezes the room while Phoebe finds the tape, along with one made by Dan. Phoebe suggests taking Owen back to the Manor, which Piper doesn't think is a good idea. She goes to check on Prue, taking Dan's tape with her. His sister paid for him to join the service and he's looking for the girl next door, someone with a good heart with the personality and looks to match. He talks about her having long dark hair and a great smile, which makes Piper smile.

Owen asks if Phoebe wants to leave, but she tells him she can't. While he's off getting drinks she has a vision of the succubus. She calls Piper over but Smith tells her he wants to ask her some questions. Morris tells him to let her go and, having seen the Succubus closing in on Owen, she shouts to Manny to take him out. Manny rushes over and punches Owen, followed by Smith before Morris arrests him. As Manny is led out, Phoebe sees the succubus is now attracted to Manny. At the station, Phoebe asks Morris to let Manny go, telling him that he's the reason why there hasn't been a murder so far tonight. She also tells him not to release Owen, who is still a potential victim.

The following day at the Manor, Piper tells Prue that Alan called. He wants to go out with her, but Piper told him Prue was "hormonal" right now. Meanwhile, Phoebe's temperature continues to rise as her connection with the succubus grows stronger. Manny has lined up dates at P3 with everyone who responded to the tape. At the club, Alan sits next to him. Manny tells him that he works at Bucklands with Prue and Alan reveals that he finds dating women difficult. He thinks Prue is cool, but that he went too slow with her. Phoebe has a vision that the succubus is in the club and sees Jan, who recorded Prue's tape at the dating service. Piper phones Prue's mobile and tells her to get outside and Phoebe collars Jan, only to have a vision that she's not the Succubus.

In the alley outside, the succubus is revealed to be Darla. Prue tries to use her powers, but find she's unable to. "Tell me I'm irresistible," Darla tells Manny before unleashing her razor-sharp tongue. Piper and Phoebe rush in as Piper screams and they freeze Darla. Prue gets to safety as Morris and Smith show up. Darla unfreezes, flinging Smith aside. She then unleashes her tongue at Morris, who shoots her, apparently killing her. However, in the aftermath, Prue finds that she's still a man.

In the coroner's office, the coroner tells Smith that preliminary test indicate that Darla was the murderer. Smith is left alone with her, and when he pulls back the sheet covering Darla, since he thinks she's a babe, she attacks. Her tongue unfurls into his mouth, and Darla kills him. At the Manor, Prue and Piper are discussing why Prue hasn't reverted to her normal self. Prue tells Piper that men are just as afraid as women and that Dan is probably afraid of rejection. Phoebe then has another vision of the Succubus killing again. Prue tells her sisters, "I gotta take a leak," but while she's gone, Phoebe has a vision of Darla and Manny in the bathroom. Piper and Phoebe rush to the bathroom to find the window smashed and Manny gone. Phoebe finds herself connected again to the Succubus,the vision of the same place as before but she doesn't know where it is. Piper suggests reversing the psychic connection with the succubus.

Manny is then seen lying on Darla's bed as she begins to seduce him before killing him, telling him that he finds her irresistible. Phoebe manages to reverse the connection so that Darla says what Phoebe is saying, allowing Manny to break through her spell. "I'm rejecting you," Manny declares, using Prue's power to throw Darla against the wall, where she is engulfed in flames and is killed. As a result, Prue finds that she's reverted to being female once more. At P3 to attend a concert by The Cranberries, Prue agrees that she's learned a few things about being a woman by being a man. In the meantime, Piper has called Dan and Phoebe has an appointment with a doctor - Owen, while Prue meets Alan.

The Book of Shadows

According to the Book: "when a witch renounces all human emotion and makes a pact with darkness to protect herself from heartbreak she becomes a succubus, a sexual predator. She seeks out powerful men who become helpless against her magic then feeds on their testosterone with her razor sharp tongue." The spell to attract the succubus involves drawing a male symbol and reciting "By the forces of heaven and hell, Draw to us this woman fell, Rend from her foul desire, That she may perish as a moth to fire."

The Power of Three

Prue, as Manny, throws Darla against the wall to destroy her. However she finds herself unable to use her powers against her outside of P3, although Piper does manage to freeze her. She also freezes Darla inside Fine Romance when Phoebe 'borrows' the tapes.

The succubus side of things could have been done quite a lot better. Former Playmate Heidi Mark looks great, but she only appears in three scenes before it is discovered that she's this week's bad girl and in most of those she seems to be competing with Alyssa Milano as to who can show the most cleavage. There are a couple of set pieces after this, although the idea of someone coming back to life on the slab is pretty ancient. There is no real background on Darla, nor is there much detail explained about Succubi in this universe.