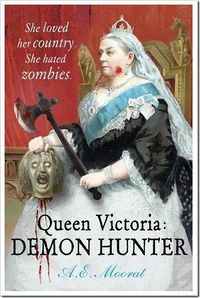 Queen Victoria: Demon Hunter, is a novel written by A. E. Morat. The work places Queen Victoria in the role of both the Queen of England, and her country's protector against demons and other evil beings. Within this novel, succubi make an appearance as minor characters.

There were many staff at Kensington Palace, fulfilling many roles; a man who was employed to catch rats, another whose job it was to sweep the chimneys. That there was someone expected to hunt demons did not shock the new Queen; that it was to be her was something of a surprise.

London, 1838. Queen Victoria is crowned; she receives the orb, the scepter, and an arsenal of bloodstained weaponry. If Britain is about to become the greatest power of the age, there’s the small matter of the undead to take care of first. Demons stalk the crown, and political ambitions have unleashed ravening hordes of zombies even within the nobility itself.

But rather than dreams of demon hunting, Queen Victoria’s thoughts are occupied by Prince Albert. Can she dedicate her life to saving her country when her heart belongs elsewhere? With lashings of glistening entrails, decapitations, zombies, and foul demons, this masterly new portrait will give a fresh understanding of a remarkable woman, a legendary monarch, and quite possibly the best demon hunter the world has ever seen.

In another incarnation as a more serious (though still satirical) author, A. E. Moorat has won critical acclaim and been shortlisted for awards. Here, however, he was chained in the dungeon, fed tea and ghost stories, and kept busy writing the adventures of Queen Victoria, Demon Hunter.

The following review can be found in the External Links below:

This book doesn't set out to educate us on Queen Victoria, though from what little research I did, some of this book is indeed historically accurate, no this book has one purpose...to entertain. And if I am being honest, I was thoroughly entertained!

At almost 400 pages, I didn't find the book overly long, and truth be told I wouldn't have minded another 50-100 pages. From the beginning we are told that demons exist among us, some pass as humans and even develop human emotions, some are more forthcoming with who and what they are. And some demons are actually humans, but then if you live in the real world you already know that. We are told that Queen Victoria and her beloved Prince Albert are to sire an heir to the throne, a descendant of the demon Baal, but we know that there is more to the royal couple than meets the eye. Along the way, we meet the Queen's loyal Prime Minister Lord Melbourne, and we can see the fatherly feelings he has towards the queen. We meet Maggie Brown the Royal "protector" and her soldiers-Hudson, Hicks and Vasquez (yes, if you are a fan of Aliens like I am this will give you pause and a bit of a laugh), but it is the Queen that takes center stage as she should.

I can only assume that the author, A.E.Moorat is an Alien fan. Aside from the names of the 'grunts' charged with protecting the queen, Moorat's Victoria bears more than a passing resemblance to Weaver's Ellen Ripley. If this was deliberate, I enjoyed the 'joke' as it were, if not...well, I won't speculate that and will assume the author knew what he was doing. (though I did look at the author's website and no mention of Aliens...sooo...) The author did a good job writing of a strong, determined woman. One that realizes her destiny isn't necessarily carved in stone. I believed in the love of Victoria and Albert, and though it was 'mushy' at times, I never found myself turned off by the detour from the violence that is central to the story.

This book was fun, it didn't try to be something it wasn't, and I appreciate that in a book like this. I wouldn't classify it as horror though, more of a satire, though a very well written one. I will certainly seek out the author's next book!