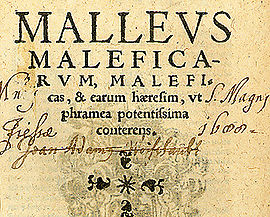 Title page of the seventh Cologne edition of the Malleus Maleficarum, 1520 (from the University of Sydney Library). The Latin title is "MALLEUS MALEFICARUM, Maleficas, & earum hæresim, ut phramea potentissima conterens." (English: The Hammer of Witches which destroyeth Witches and their heresy like a most powerful spear).[1]

The Malleus Maleficarum[2] (Latin for "The Hammer of Witches", or "Der Hexenhammer" in German) is a famous treatise on witches, written in 1486 by Heinrich Kramer, an Inquisitor of the Catholic Church, and was first published in Germany in 1487.[3] Jacob Sprenger is also often attributed as an author, but some scholars now believe that he became associated with the Malleus Maleficarum largely as a result of Kramer's wish to lend his book as much official authority as possible.[4]

The main purpose of the Malleus was to attempt to systematically refute arguments claiming that witchcraft does not exist, discredit those who expressed skepticism about its reality, to claim that witches were more often women than men, and to educate magistrates on the procedures that could find them out and convict them.[5] Kramer was denounced by the Inquisition in 1490.[6]

Within this work, multiple references are made to beings called Succubi and Incubi for various means, methods and purposes.

The Malleus Maleficarum was published in 1487 by Heinrich Kramer (Latinized Institoris) and James Sprenger (also known as Jacob or Jakob Sprenger). Scholars have debated how much Sprenger contributed to the work. Some say his role was minor[7] while others say there is little evidence for this claim.[8]

In 1484 Kramer made one of the first attempts at a systematic persecution of witches in the region of Tyrol. It was not a success, Kramer was thrown out of the territory, and dismissed by the local bishop as a "senile old man". According to Diarmaid MacCulloch, writing the book was Kramer’s act of self-justification and revenge.[9] Some scholars have suggested that following the failed efforts in Tyrol, Kramer and Sprenger requested and received a papal bull Summis desiderantes affectibus in 1484. It allegedly gave full papal approval for the Inquisition to prosecute witchcraft in general and for Kramer and Sprenger specifically.[10] Malleus Maleficarum was written in 1484 or 1485 and the papal bull was included as part of the preface.[10] The preface also includes an approbation from the University of Cologne’s Faculty of Theology. The authenticity of the Cologne endorsement was first questioned by Joseph Hansen but Christopher S. Mackay rejects his theory as a misunderstanding.[11] The Malleus Maleficarum drew on earlier sources like the Johannes Nider's treatise Formicarius, written 1435/37.[12]

The book became the handbook for witch-hunters and Inquisitors throughout Late Medieval Europe. Between the years 1487 and 1520, the work was published thirteen times. It was again published between the years of 1574 to 1669 a total of sixteen times. Regardless of the authenticity of the papal bull and endorsements which appear at the beginning of the book, its presence contributed to the popularity of the work.

Folk belief in reality of witchcraft had been denied by the church in earlier centuries; Charlemagne had specifically outlawed the old practice of witch burning "in the manner of the pagans".[13] By the 15th century belief in witches was once again openly accepted in European society, but they typically suffered penalties no more harsh than public penances such as a day in the stocks[9]. Persecution of witches became more brutal following the publication of the Malleus, with witchcraft being accepted as a real and dangerous phenomenon.[14]

The Malleus Maleficarum asserts that three elements are necessary for witchcraft: the evil-intentioned witch, the help of the Devil, and the Permission of God.[15] The treatise is divided up into three sections. The first section tries to refute critics who deny the reality of witchcraft, thereby hindering its prosecution. The second section describes the actual forms of witchcraft and its remedies. The third section is to assist judges confronting and combating witchcraft. However, each of these three sections has the prevailing themes of what is witchcraft and who is a witch. The Malleus Maleficarum can hardly be called an original text, for it heavily relies upon earlier works such as Visconti and, most famously, Johannes Nider's Formicarius (1435).[16]

Section I argues that because the Devil exists and has the power to do astounding things, witches exist to help, if done through the aid of the Devil and with the permission of God.[17] The Devil’s power is greatest where human sexuality is concerned, for it was believed that women were more sexual than men. Libidinous women had sex with the Devil, thus paving their way to become witches. According to the Malleus “all witchcraft comes from carnal lust, which is in women insatiable.”

In section II of the Malleus Maleficarum, the authors turn to matters of practice by discussing actual cases. This section first discusses the powers of witches, and then goes into recruitment strategies.[18] It is mostly witches as opposed to the Devil who do the recruiting, by making something go wrong in the life of a respectable matron that makes her consult the knowledge of a witch, or by introducing young maidens to tempting young devils.[18] This section also details how witches cast spells and remedies that can be taken to prevent witchcraft or help those that have been affected by it.[19]

Section III is the legal part of the Malleus that describes how to prosecute a witch. The arguments are clearly laid for the lay magistrates prosecuting witches. Institoris and Sprenger offer a step-by-step guide to the conduct of a witch trial, from the method of initiating the process and assembling accusations, to the interrogation (including torture) of witnesses, and the formal charging of the accused.[20] Women who did not cry during their trial were automatically believed to be witches.[21]

Because the work deals with women as witches, some believe and claim that the Malleus Maleficarum is a work of misogyny. The treatise describes how women become inclined for witchcraft, claiming they were susceptible to demonic temptations through their manifold weaknesses. It was believed that they were weaker in faith and were more carnal than men.[22] Michael Bailey claims that most of the women accused as witches had strong personalities and were known to defy convention by overstepping the lines of proper female decorum.[23] After the publication of the Malleus, most of those who were prosecuted as witches were women.[24] Indeed, the very title of the Malleus Maleficarum is feminine, alluding to the idea that it was women who were the villains. Otherwise, it would be the Malleus Maleficorum (the masculine form of the Latin noun maleficus or malefica, 'witch'), which would mean The Hammer of (Male) Witches. In Latin, the feminine "Maleficarum" would only be used for women while the masculine "Maleficorum" could be used for men alone or for both sexes if together.[25]

The Malleus Maleficarum accuses witches of infanticide, cannibalism, casting evil spells to harm their enemies, and having the power to steal men’s penises. It goes on to give accounts of witches committing these crimes.

The Malleus Maleficarum was heavily influenced by humanistic ideologies. The ancient subjects of astronomy, philosophy, and medicine were being reintroduced to the West at this time, as well as a plethora of ancient texts being rediscovered and studied. The Malleus often makes reference to the Bible and Aristotelian thought, and it is also heavily influenced by the philosophical tenets of Neo-Platonism.[26] It also mentions astrology and astronomy, which had recently been reintroduced to the West by the ancient works of Pythagoras.[27]

Reasons for widespread use

The Malleus Maleficarum was able to spread throughout Europe so rapidly in the late fifteenth and the beginning of the sixteenth century because of the innovation of the printing press in the middle of the fifteenth century by Johannes Gutenberg. That printing should have been invented thirty years before the first publication of the Malleus, which instigated the fervor of witch hunting, and, in the words of Russell, "the swift propagation of the witch hysteria by the press was the first evidence that Gutenberg had not liberated man from original sin."[28] The Malleus is also heavily influenced by the subjects of divination, astrology, and healing rituals the Church inherited from antiquity.[29]

Between 1487 and 1520, twenty editions of the Malleus were published, and another sixteen editions were published between 1574 and 1669.[31] Popular accounts suggest that the extensive publishing of the Malleus Maleficarum in 1487 launched centuries of witch-hunts in Europe. Estimations of deaths have varied widely. According to MacCulloch, the Malleus was one of several key causes of the witch craze, along with popular superstition, jealousy of witches' knowledge from humanist scholars, and tensions created by the Protestant Reformation.[9]

This is the edition held by the University of Sydney Library. [3]

Volume 1 is the Latin text of the first edition of 1486-7 with annotations and an introduction. Volume 2 is an English translation with explanatory notes.

A disclaimer says: "Please note that we at the Malleus Maleficarum Online project are not scholars or experts on the subject."