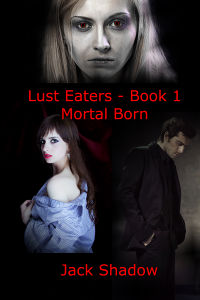 Lust Eaters - Book 1: Mortal Born is an eBook written by Jack Shadow. It is the first work in the Lust Eaters series by this author. In this work the character Anastasia is a Succubus who traps a family in her clutches.

Appearances are deceiving. Thinking he is rescuing a girl in distress an accountant unwittingly brings home an ancient evil that enslaves his entire family. Anastasia has been walking the earth since the dawn of time feeding on the lust of men. Trent thought he was rescuing her, now his wife must rescue him and their son from clutches of a demon, but demons can only be destroyed by another demon. Book 1 of the Lust Eaters Series introduces readers to a hidden world where sex demons feed off the lust of mortals.

The following review was originally published on Tera's Blog, A Succubi's Tale on November 13, 2011

It’s interesting to see how other people see the concept of Succubi and Incubi. More so when they take their ideas and turn them into stories and novels. Occasionally I don’t agree with the ideas, but I do give them a chance to give me story that keeps my interest in spite of what the concepts might be.

And this time, this is one of those ideas that is tempting, interesting, but just falls short of give me enough of the world that I want to see…

The story begins with Trent on his way home seeing a woman in trouble and rescuing her. It turns out that the woman, Anastasia, isn’t what she appears to be. She is a Succubus, and over the course of the story uses her powers to take control of Trent, his wife Nancy and their son Rick.

Her control is over the men and through them Nancy who does her best to try and find a way to overcome the control that Anastasia has over her family. But the cost of that might be more than she realizes it will be.

I won’t spoil the end of the story, nor anything else about the work, but suffice it to say that there is a battle between Anastasia and Nancy and what happens to her family changes their lives forever.

I have to say that the story didn’t quite work for me as well as I had hoped it would. There were a lot of sex scenes in the work, but the connections between them were not enough to hold my interest as I had hoped.

It strikes me that a story is not sex alone when it comes to Succubi and Incubi. There must be more than that for a work to take hold of me and make it worth my time to read.

This author came close to making this work here, but the sex seemed to be more important than the world that the Succubi and Incubi exist in and we get but a small taste of it which was truly disappointing to me.

I should note that there are moments of incest in the story, it’s not the focus of the work by far, but readers should be aware of it…

I’m giving this work three pitchforks out of five.

Too short, the universe of the Succubi and Incubi needed more exploration. I understand that it is the first book in a series, but really there should have been so much more background shared by far.