From SuccuWiki - The Wiki of the Succubi
Revision as of 10:04, 30 September 2015 by TeraS (talk | contribs)
(diff) ← Older revision | Latest revision (diff) | Newer revision → (diff)
Jump to navigation Jump to search

Chloe Love is a young Succubus character who first appeared in the Eerie Cuties webcomic written by the artist Gisèle Legacé (Giz), who was the original primary artist, and Dave Zeroi, and the comic is coloured by Miguel Marques. The series first appeared on Monday, June 1, 2009. A new strip is published often (usually twice weekly on Mondays and Wednesdays) on the Eerie Cuties website.

Chloe remained with the Eerie Cuties series until the "Cursed Panties" arc when she was sent to Hell by her mother in order to learn about being a Succubus. Following this, Chloe then appeared in her own series, Dangerously Chloe.

Chloe Love is a 14 year old Succubus. She is blonde, with reddish eyes, red horns and a pair of black bat-like wings and a long pointed succubus tail. She also has freckles which to her is not Succubus-like. She considers herself as a failure as a Succubus and as a result attempts to hide her Succubus features. She does so by wearing a black headband with horns that she puts over her own real horns, and is able to absorb her tail and wings into her own body (though they do come out on their own under stressful circumstances).[1]

She is bashful, caring, and doesn't think that those qualities are Succubus-like and so, she sees herself as a failure as a Succubus. Chloe is also the friend of Nina Delacroix, who is a 14-year old Vampire who was born on Easter and feeds on chocolate. Chloe revealed herself to be a Succubus in the July 13th, 2009 webcomic of the series, before that time, what sort of creature Chloe was had not been stated.[2]

In the July 15th, 2009 comic, Chloe lamented her failings as a succubus, but the undoggedly optimistic Nina assured her that she was pretty.[3] Shortly after this, right after she expressed her boosted self esteem, she had a Succubus growth spurt which caused some problems for her.[4]

There has been some speculation that Chloe does not have regular contact with her Succubus parent, given her low opinion of herself, and her actions with the manifestation of her 'pheromone delivery system'.

There was a piece of background information on Chloe that appeared in the series. Nina's mother, Mrs. Delacroix appeared when Nina was having a sleepover. She met Chloe and commented that Chloe's mother's name was Adora Love.[5] It was also commented by Chloe that her succubus nature makes her want to make girls look pretty when she was at Nina's sleepover party.

Eventually Chloe came into possession of her mother's cursed panties and changed dramatically both in age and her powers, causing all kind of havoc in Eerie Cuties. Eventually she lost ownership of the panties, regained some of her past personality and things returned to what passed for normal in the series. However, Chloe's mother decided that the best thing for her to do was to spend some time in hell to control her powers better.

When this occurred, Chloe was written out of Eerie Cuties and it was uncertain if she would ever return, However, a new webcomic series called Dangerously Chloe appeared to follow her new adventures separately from the main Eerie Cuties series.

Chloe feeding while under duress

An example of one of Chloe's hearts from the December 23, 2009 comic strip

Chloe displayed an unusual method of sending out her Succubus powers.[6] She creates small hearts that look similar to the Succubus.net mascot, save that they do not have tails or horns that have been seen. They scatter and are attracted to male targets, exploding on contact with them. After that happens, the affected male is infatuated with Chloe. This all started when Chloe got the hiccups and, according to the story so far, if she sneezed she would let loose dozens of them.[7] This could well be a problem, as Chloe seems to have been stockpiling them in her school locker for quite some time.[8]

This came to a head when Layla, the older sister of Nina, sprayed lilac hairspray, triggering an allergic reaction. The resulting explosion of pheromones coated the school[9] and has resulted in a 'zombie apocalypse' of boys chasing her down.[10] The incident was mostly brought to a close when Nina activated the sprinkler system,[11] but Chloe had been pulled out of the the building by some of the boys. Under 'attack' by several boys, her powers activated on their own, draining the 'life force' from several boys (and the French teacher).[12] Chloe felt guilty about this, though it was revealed that the boys could recover from it.[13] 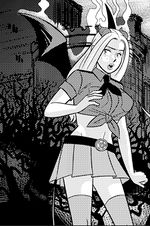 Chloe Love as she appears in the Dangerously Chloe series

Following her mother's decision to take Chloe to hell in order to learn to control her powers better after the "panties" incident, Chloe reappeared in a new webcomic called Dangerously Chloe.

In this series, Chloe's physical appearance was that of a mature teenager and her powers as a Succubus were fully developed. The series followed Chloe as she attempted to deal with her new powers while attending Succubus Academy. At the beginning of the series, Chloe was summoned to Earth by Teddy, who then becomes entangled in Chloe's life.

As the series progressed, a relationship formed between Chloe and Teddy, though that was always tempered by the ongoing threat that, at some point, Chloe would have to claim Teddy's soul unless he found love.