For other uses of the word Succubus, or movies involving Succubi, see Succubus (disambiguation).

Umbrage is a 2009 British horror film written and directed by Drew Cullingham. It completed principal photography during 2009 and has been shown in limited release since it's completion. The film stars Doug Bradley, who played the role of Pinhead in the Hellraiser movie as Jacob, one of the main characters. The movie tells the story of a dysfunctional family who moves into a remote farm and they find themselves in the middle of a centuries-old feud between a vampire cowboy and the demoness Lilith. The role of Lilith is played by Natalie Celino, and the character is described as being the mother to the Succubi. It was noted by the director in March of 2011 that Lionsgate films would be releasing the film in Canada and the United States late in 2011.[1]

Title Logo for the movie Umbrage 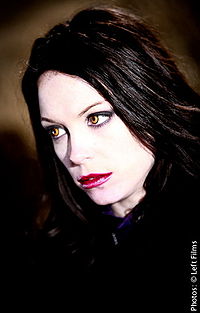 The actress Natalie Celino as Lilith in the film Umbrage

In the Old West, the assassination of an ageing cowboy is thwarted by a sultry vampiress, the would-be killer left for dead in the dust. A hundred years later an ancient obsidian mirror, long unearthed from the Mesopotamian desert, is liberated from an American collector's vault and illegally transported to Europe. Jacob, an unscrupulous antiques dealer, moves to a remote farmhouse with his pregnant young wife, Lauren, and his difficult ward, Rachel. His goals are clear: to pass this near-priceless mirror to the highest bidder, and to prevent these two women from ripping each other apart.

Nearby, a beautiful ornithologist, in nocturnal pursuit of the Screech Owl, is disturbed in her hide by a couple of noisy hikers. Her efforts ruined, she joins them by their campfire, but when one of them is mysteriously mutilated in the woods, she and the other are forced to flee and seek refuge at Jacob's farm. Something has been unleashed into the dark of that night....

Shadows take on a life of their own, and the blood begins to flow. Maybe it's all down to the ominous cowboy hiding in the barn who doesn't seem to cast any reflection in the dark mirror. Maybe it's because the shiny black artifact is the enchanted talisman and portal of Lilith, the willful first wife of Adam, exiled from Eden to spawn her demonic offspring. The family find themselves in the middle of a century old grudge between a vengeful undead cowboy and the re-awakened Lilith, mother to the Succubi, ruler of shadows, slaughterer of children, and consort to the devil himself.

Sometimes the only weapon against evil is evil itself.

The following review is taken from the IMDb here:

This review may contain spoilers

I was lucky enough to watch an advance screening of this at the Abertoir Horror Festival and what a treat it was.

Doug Bradley acting out of his usual typecasting was an amazing sight and he gives a terrific performance in this film that should not be missed.

Drew has created a winning story here, one that I'm sure will go on to more success. The camera work and lighting, were superior to many films with a much higher budget these days and it shows that the team worked hard with their budget (low 6 figures I believe).

The story mixes humor and horror elegantly neither detracting from the other in this supernatural tale. There is a wonderful atmosphere with intricately diverse characters, each having his or her own story leading in a different direction, a character for everyone in this movie, from an Irish bible quoting cowboy vampire (I kid you not) and a Hewbrew sex demon and Satan, to two friends having a laugh on a camping trip akin to American Werewolf in London, to the usual dysfunctional family, sitting down to eat in a new house.

The dialogue makes the story, whether it is the witty banter between the characters, or the laying-it-all-on-the-line passionate heartfelt emotions from Natalie Celino as an undead temptress, you can't help but be intrigued by this film which with some edge of you seat suspense as you wonder whether or not the "shadows" are even real leaves you second guessing who killed who, thrilling mystery as the body count rises, good vs. evil or the wildwest vs. mythology, and passion-filled romance as an Irish Vampire seduces the audience with his charm.

This is a film that should not be missed, especially if you are a fan of the Preacher comic books.

My hat goes off to Drew and the rest of the cast and crew for this superb addition to cinema.

Dread Central described the film, Drew Cullingham's first directorial effort, as "ambitious", and that the film was an "eclectic mix of family melodrama, vampire action, supernatural horror and Western styling". The review stated that these diverse elements were its downfall, "leaving a wildly inconsistent yet occasionally promising piece of work," that it was not lacking in well-conceived individual elements, and the backgrounds of the characters are decently explored. But the major problem was in the director's inability to deliver on the potential of those elements, with his efforts "cack-handed at best, and laughable at worst." The reviewer appreciated his "eye for cinema" and his ability to make the film look like it cost more to produce than one might have expected from its small budget. Further, the cast "for the most part" performed admirably; Bradley "seems to be having a lot of fun in a 'normal' role" as opposed to his usual genre fare, and carried his character of a family man with aplomb. His co-star Rita Ramnani was "effectively annoying and self-centered as Rachel", but was let down by the screenplay, not by any failing on her part. The review considered Jonnie Hurn's Phelan to be "the most interesting character here, both on page and screen," and a well-nuanced and suitably impressive anti-hero. Natalie Celino as Lilith was faulted for her "constantly off-kilter, disinterested line delivery and a Scottish accent so thick it proves almost impenetrable."[2]

Quiet Earth, in writing about iconic vampire characters, compared Jonnie Hurn's Irish cowboy vampire Phelan with Buffy the Vampire Slayer and Angel and called Drew Cullingham's Umbrage "a very unique type of horror film, if that's even what you want to call it." The review stated that despite screening at Abertoir Horror film festivals, the film was more of a "supernatural/fantasy type of film, featuring plenty of banter and a playing against type performance from the legendary Doug Bradley," and it runs "against a lot of the horror genre's conventions, and also a lot of film conventions in general." The director had explained to the audience that the film was "never really intended as a vampire film and stressed that neither is the word 'vampire' used anywhere throughout the film's duration", and that his intention was to "take the monster out of the genre and turn this particular type of horror creature into a proper, well developed character", creating a likable anti-hero. Of Hurn's Phelan, the review stated that he gave "an outstanding, multi-dimensional performance" which "makes the character appear fascinating, entertaining and sexy", in a manner missing from Edward Cullen in the Twilight series, and presents him with "the same kind of Clint Eastwood style presence on screen".[3]

MJ Simpson panned the film for not meeting its potential, stating that the film's trailer had him anticipating release of the feature, but the film itself was "disappointing, frustrating and ultimately unsatisfying," despite feeling that it did well in trying "to do something different". Simpson wrote that it was a "good-looking movie", due to the cinematography of James Friend, the production design by Charlie Falconer, and the gore effects by Scott Orr, but the main problem with the film is its script. Noting that Drew Cullingham was writer, director, producer, and editor, Simpson stated, "When a single individual has that much input into a film, there’s potential for a pure, unsullied, personal vision to shine through - but there’s equal potential for major problems to be glossed over or ignored." Simpson described the "threat" in the film as "ill-defined", a serious flaw for any horror film. He wrote that none of the film's characters have a clear motivation for their actions. As examples, Simpson gave the lack of any logical reason why a husband and wife expecting their first child together would decide that the middle of winter would be a good time to move to an "an isolated 17th century farmhouse 20 miles from the nearest town which has no telephone connection and no mobile signal"; why two adult men would decide to camp together in a wood in the middle of nowhere; why one would become so immediately enamored by a total stranger that he would follow her into the woods for a tryst; or why, after that friend is horribly maimed, the second man would abandon him and hike away with that same woman looking for help. Simpson noted that several more incongruous scenes served a purpose in progressing the plot, but had "no purpose within the reality of the film". The repeated flaw, he stated, is that "[t]ime after time, characters behave in a way which is illogical, inexplicable or just downright nonsensical - but expedient. ... Umbrage is a mishmash of ideas that hasn’t been properly worked out." Summarizing, Simpson stated, "If you want a British vampire western, this is probably the best you can pick. Doug Bradley buckles down to his usual reliable performance, some of the other acting is also good (some less so) and there are some clever moments. But Umbrage could have been so much better and its problems stem not from any unexpected snowfall or malfunctioning generator but from a poor script which was nowhere near ready to shoot."[4]

Fangoria first wrote about Umbrage in November 2010, when North American rights to distribution were "picked up" by Grindstone Entertainment, with release through Lionsgate Films expected.[5] Upon the film's UK DVD release in October 2011, Fangoria revisited the topic to share an exclusive video excerpt and photos.[6]

Umbrage received mixed reviews from critics which praised the acting talent of Jonnie Hurn. At horror film reviewing website Horrortalk.com, Charlotte Stear wrote, "Basically, this film tried too much to do lots all at once and with its obviously small budget, its main failure is how ambitious it is for what it can realistically do."[7] Another grading website Horrorphilia gave the film 5 stars out of 10, referring to its "Unfortunate wasted potential."[8]

The film debuted at the London FrightFest Film Festival on October 31, 2009[9] and screened at Abertoir Horror film festivals through 2009 and 2010.[3] The film became available on DVD in the UK in October 2011, with a United States and Canada DVD release to be through Lionsgate in 2012.[10][6]

DVD extras include a 20-minute "making of" documentary, a music video for Hokie Joint, a video interview the film's lead actor Doug Bradley, and an audio interview of Bradley and director Drew Cullingham.[10][6]