The Succubus in a Red Dress Series: Books 1-4 (eBook) 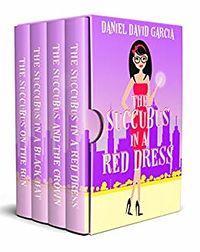 She's not your ordinary, run-of-the-mill succubus!

This omnibus edition contains the first four books in the Succubus in a Red Dress series:

Join Delilah on her adventures. If you're a fan of light-hearted paranormal comedy, makeovers and mayhem, you're in for a wild ride!