The Succubus in a Red Dress (eBook) 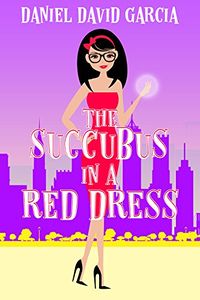 The Succubus in a Red Dress Revised eBook Cover, written by Daniel Garcia

Delilah is only a nerdy coffee clerk in New York City whose biggest problem is trying to find a job that will cover more than her rent, until the day one of her customers collapses after touching her.

Now she has demon hunters and witches chasing after her, and is being tailed by a crazy blonde in a Ferrari who says she wants to be her mentor. Oh, and she just might be a succubus.

Whatever you do, don't say it can't get any worse.

The following review was originally published by Tera on her Blog, A Succubi's Tale on June 1, 2014

Sometimes when you think you aren’t anything special it takes a little hope, a little love, and a lot of truth to make you really see not what you are, but who you are. The trick is, as always, to thyself be true. If you can, then anything is possible…

Delilah is unassuming, sees herself as unattractive and, as a whole, really doesn’t feel like she has a lot of worth. At least until she meets Ken, gets tangled up with Chloe, run over by her mother, whom she’s never seen… and also finds out that she’s a Succubus. But that’s not quite true. She’s a lot more than that as everyone around her will soon find out.

I simply love Delilah. There’s really no other way to put it. She’s kind, she cares, she has a good soul and more importantly, she knows, without a doubt, what’s right and what’s wrong. She is not a stereotypical Succubus, she has no horns or tail, or wings for that matter, but she has something much more important and powerful. There’s a light around her, something that isn’t expected of a Succubus and being that, having that, means that she need not be like all of the rest of her kind. She might even have the ability to change the world and for the better.

Her transformation from “ordinary” to “swan” is just so cute and I loved the interplay between herself and Chloe as that happened. Chloe is another Succubus in the story, one that at the beginning seems to be teetering on the edge of right and wrong in a lot of ways, and to be honest I wasn’t sure I liked her at the beginning of the story, but she grew on me, she changed by the end of the story and honestly that was a really well done transformation.

Then there is Ken, a nice guy that Delilah has her first Succubus experience with, but as well, also has another experience that appeared to be impossible. So everyone tells them both. Mind you, honestly, the mythos that gets built up around Delilah really makes what happens and the reasons behind it, exactly right for her. But Ken turns out to be something unexpected and in the wake of Delilah’s choice in what she does for him, that opens up a very interesting plot and relationship. It makes a huge different to Delilah, even if it takes her forever to see it and Ken about as long to get his own family to deal with the truth as well.

I mentioned Delilah’s mother, she is Nerissa, and she is, honestly, a vain, power hungry little scared thing that wants to rule the world. She’s quite clearly a threat from the moment she first appears. But the thing is, who she is, being so dark inside, so uncaring about her daughter and what happens when they meet is… sad. There is a very clear difference between mother and daughter here and, for me at least, that made Delilah so much more than her mother would ever be.

The supporting characters, Succubi and otherwise, have their own clear personalities and there’s a lot of world building that I really enjoyed. The relationships in the story mattered the most and that I found added to my enjoyment of the story. There is still a lot of mystery, questions about the why’s and how’s to be answered. But for this work that wasn’t important. What did matter was Delilah making a decision, being true to herself and defending that against some really bad odds.

Beautifully written, I couldn’t put the story down. All of the little quirks, laughs, tears and joy that Delilah and her friends go through tell a story that just spoke to me so very deeply. In short, Delilah is very much one of the Succubi. And I adore her.

A solid five out of five pitchforks.

Completely recommended, every moment is joyfully written and told. Easily one of the top ten Succubus stories of the year, and it was simply amazing.