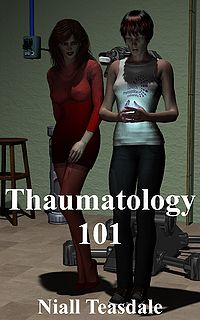 Thaumatology 101 is an eBook written by Niall Teasdale. It is the first work in the Thaumatology series by this author. In this series, the character Lily Carpenter is a half-succubus and a friend to the main character of the series Ceridwyn Brent.

Ceridwyn Brent had a fairly easy life, kept safe from the supernatural dangers of the world around her by the enchantments her parents placed on her when she was a baby. Then her parents died in a car accident leaving their daughter a well-protected nervous wreck, afraid of travel and especially cars, and unwilling to leave the house. Then she met Lily Carpenter, a half-succubus trying to get her life back on track and they helped each other back to something like a normal life. As normal as it gets when your house looks like the Munsters were the chief designers and your housekeeper is an enigmatic fairy.

It was Lily who persuaded Ceri to apply for the job as research assistant to Doctor Cheryl Tennant, lead researcher in quantum thaumatology at the London Metropolitan University. Doctor Tennant is locked in a battle with a better funded team at Cambridge to discover the fundamental particle of magic, the Null Thaumiton. Everyone knows the race has been heating up with both sides close to a result, but there was no way Ceri could have expected sabotage and murder to be involved in an academic contest.

Soon Ceri and Lily are in the middle of an academic war, surrounded by wizards, werewolves, and demons, and in the meantime there’s still that elusive particle to uncover.

The following review was originally published on Tera's Blog - A Succubi's Tale on October 14th, 2011.

First and foremost, it should be said that this isn’t a work of erotica. That’s not to say that there aren’t some moments in it. There are some really well written scenes between Lily and Ceri that were exactly right in many ways…

But it’s not only that, Lily, while she is a half-succubus, is not a “sex doll” as many writers have Succubi be. That’s refreshing and, truly, a rare thing to see. What’s more fascinating is how she struggles against her nature, with and sometimes without the help of Ceri, and how her personality changes as the story progresses. It’s also interesting how Ceri’s view of her friend, and they are friends, in the story both threatens their relationship and, eventually, strengthens it. Now Lily doesn’t have horns or a tail, she is a half after all and so she looks completely human if of course being very beautiful.

As an aside, the book cover above shows Lily on the left and Ceri on the right. She knows what she is, and in knowing she also fights against her Succubus side. She’s been through hell in her past and finding Ceri, a woman that her powers don’t work on, gives her the strength to be more than what she was becoming before.

That brings us to the heroine of the story, Ceri. It’s important to me at least that characters that are the core of a story make you want to care about them. Now I cared about Lily when she first appeared and there were moments in the story were I did, actually, fear for her. Ceri on the other hand, I didn’t fear for. She is someone that seems to have their stuff together, save for some moments of indecision at the beginning of the story. As she grows in character as the story is told, she becomes not simply a “person that bad things happen to.”

That’s important because you can only threaten someone so many times before you, as a reader, expect her to get into a mess and then get herself out of it again. You don’t expect them to fail, and Ceri does fail now and again, but her friends help her to figure out her life and world and move on again in a positive direction.

I’ll get to the other characters that interested me in a moment as I want to comment on the universe in which they live. Their world, which is set in our current time frame, isn’t our world. Not by any stretch of the imagination. There was an event in the past that unleashed magic into the world and through that all sorts of mythical, supernatural and similar beings have appeared. There are Succubi of course, but also vampires, witches, zombies, and all kinds of other beings which, in this world, fit the setting really well. I found it easy to place myself into the worldview that the author has created. As I noted, it isn’t our world. There has been massive changes that have occurred there and the repercussions still vibrate to the time this story is set in,

Now, that alone is fascinating, but what is more so is that the world has a clear set of rules that all being that use magic have to abide by, and the author has laid out the system very clearly and makes it well worth understanding. I also liked that the understanding of those rules wasn’t an info dump but became a core part of the story. The point of the story, or the goal of what Ceri and Cheryl are trying to discover connects characters and events in a tight web. That web, if you pay attention and you should when reading this work, makes so much sense by the end of the story that you wonder how long the author spent thinking about the universe.

It must have been ages…

I also can see the care that has been invested in the supporting characters as well. Even the smallest appearance of one of them means something, and it’s important to pay attention to them because they do have a bearing on where the story goes and what happens to Ceri. It is fascinating to read of their past and present and watch as they are fit into the world that she lives in.

Possibly the most interesting to me are Twill, a Fairy that is almost completely a mystery. That’s a good thing as following her through the story and what she does to help, or confuse Ceri at times is amusing at times, but does make you consider what’s going on and remind you that you don’t know everything as the story moves on. Then comes Carter Fleming, a mystery is his own right, and he is one that I would love to know more about. There is something going on in his past and I’d love to know what that is. I also find the transformation of Cheryl Tennant through the story amazing in taking her from where she starts to where she ends up. Just an amazing series of characters that add so much to the story as a whole…

The author has indicated that this is the first book in a series. The next work, called Demon’s Moon will be released soon and a third book is also being fleshed out as well. I can hardly wait for the story to continue. Not just for Lily, who is just fascinating to me, but Ceri and all of the people that surround her… I am quite sure that they are all in for some… interesting times to come…

I’m giving this work five pitchforks out of five.

It’s fun, interesting, well written, has a Succubus that I want to care about in it and a heroine and world that are just so well fleshed out that I almost expect to see both Ceri and Lily walking down the street someday…

Well worth your time to read and I hope that you do! Much thanks to Niall for answering some of my questions on his site, please do visit it for lots of background on the characters and world they live in!