Taken By The Succubus (eBook) 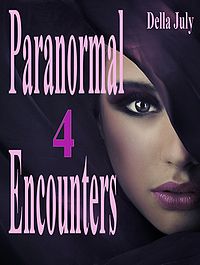 Taken By The Succubus is an eBook written by Della July. In this work, one of the main characters is a Succubus. This work was re-released in 2013 as Gender Swap Succubus. The reissue has some minor changes from the original story, but otherwise has no major changes in the storyline, characters or settings.

When Joey rubs an old Aladdin's like lamp he doesn't expect a creature living inside to show up and turn upside down his viewpoint on his dream orgasm. But then he realizes that something important is missing in this great sex recipe...

The following review was originally published by Tera on her Blog, A Succubi's Tale on December 2, 2014

Joey uses a lamp from a friend that promises to give him what he desires, his fondest wish to be with someone he wishes to be with. That dream comes true, but not exactly how Joey thought it would be in many ways. And in that dream, he learns a lesson about reality that he should have known in the first place.

This is an odd work in a lot of ways to me at least. The main one has to do with the way the Succubus in the story, if she is one mind you, acts and speaks. It seems off somehow in the course of the story in tone or words or both at times and that jarred me from the story many times. I didn’t have a problem with the themes, or the actions, or even what happened to Joey as a result of his desires and the trickery of the Succubus.

My problem is that the writing seemed uneven moving from well written passages into hard abrupt moments in the story that felt wrong. It is most likely my personal preferences speaking, but there was just no… soul… in the characters for the most part I felt until the last few pages where the climax was.

The Succubus herself was very two dimensional and quite stereotypical for the most part. Joey was not much better as well and while I can chalk that up to this work being a short hot flash it doesn’t make for a work that I could really enjoy as a whole.

I should say, quite clearly, that I didn’t have a problem with the themes of gender swapping in this story nor did I have a problem with the sex scene overall. Where my problem comes in is in the cardboard emotions and dialogue within the work. I wanted to have just a little bit of character growth along with erotica and, to me at least, there was very little of that to be seen until there was almost nothing left to read.

As a hot flash, this work could have been better than it was if there was something more given to Joey’s personality from the beginning and not just what happens at the end. Lessons learned need to come throughout a story and not as a bolt of lightning out of the blue.

Two pitchforks out of five.

A hot flash that was missing something. I’m still not sure what that is exactly, but in having it not there hurt the story and that bothers me…