Succubus was a 2001 produced, 2002 released, direct to video adult movie starring Dino Bravo, TJ Cummings, Wanda Curtis, Bridgette Kerkove and Julie Meadows. A couple accidentally injures a woman in a car accident, they take her home to make sure that this strangely beautiful woman is as unharmed as she seems but discover that she is, in fact, the succubus known as Lilith. 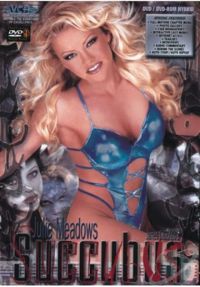 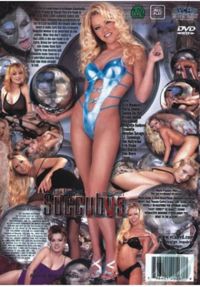 Carl and Terry's marriage is in danger. Constantly at odds, it looks as though they are ready to give up. Until Lilith suddenly comes into their lives. Thinking they accidentally hit her in a car accident, the couple takes her home to make sure that this strangely beautiful woman is as unharmed as she seems. What they don't realize is that Lilith is the one ready to do harm. Using her dark powers she shows them their hearts true desires and ultimately leads them on a path of unbridled passion that just may take them straight to hell.

The following review was taken from the site Adult DVD Talk.

Julie Meadows sees things. Not dead people, but things that nobody else, such as her husband Herschel Savage, normally sees. While arguing about it on the way home from a party, Herschel hits somebody with their car, but they can’t find the body anywhere. They get back in the car and both see Ava Vincent in the road in front of them. Ava asks for their help and to take her home with them. She stays with them for a little bit, and almost immediately Julie and Herschel find themselves being drawn into their sexual desires as well as situations darker than their normal lives.

After checking out Ava Vincent, Herschel goes to leave but finds that she’s suddenly naked and by the door. She lures him back to the bed where he eats her pussy before she sucks his cock and gives him extremely great eyes. Ava saves a horse by fucking Herschel cowgirl style, and then lays back for him to take her in a standing missionary. They finish it off with a nice pop on Ava’s all natural, all American tits. It’s a hot scene that’s helped out quite a bit by Ava and the nasty, almost evil look that so often fills her great eyes.

Julie explores her yearnings for being with another man with Dino Bravo, who looks a little like Joe Bob Briggs. Julie starts out rubbernecking Dino’s cock, and as usual looks like she’s really enjoying herself. Julie hops up on the counter to let Dino tongue her pussy and asshole. He comes up to fuck her, and has a smile on his face that makes it look like Dino normally runs jokes through his head to not cum rather than baseball stats. Julie also lets Dino fuck her from behind. As Dino fucks her, he changes to reveal that he’s really Ava Vincent. Julie gives a few scared looks now and then, making it look like she might realize what’s going on. Finally, a stunt dick puts a nice load on Julie’s great ass.

When going through a dark alley, Brooke Hunter, Herschel Savage, a show with bums Kyle Stone and Don Hollywood, who’s a combination of Randy “Leatherface” West’s apparent age and Ed “Ewwwww” Powers’ looks. Brooke’s a slightly above average looking blonde with a very nice and fairly realistic body, decides to give her boss. She attacks Kyle’s cock as Don attacks her asshole with his tongue. She bends and lays over a barrel for the guys to take turns fucking her bald pussy. After a while, the bums realize that the nearby mattress hasn’t been puked or pissed on too much, so Don lays back and lets Brooke ride him before Kyle pulls into her ass to completely fill her up. Brooke really gets into it and gets really vocal as she takes both guys, and eventually takes Kyle’s pop on her nice tits. Don, however, doesn’t let go with a pop and was probably happy enough to just be able to get a hard-on at his age.

Julie Meadows goes after what she wants, which just happens to be Guy DiSilva when he and his wife, Salena del Ray, comes over for dinner. She crawls across the table like a cat as Herschel watches from across the table unable to stop her and Salena gets turned on watching. Julie raises her legs high in the air so Guy can lick her holes, and then invites Salena up on the table to join in on the action. The girls repay Guy by teaming up to suck his cock before Julie hops up on Guy’s cock as Salena watches and masturbates. Guy finishes himself off with Salena in a couple positions before Julie jerks him off on Salena’s ass. It’s another hot scene that has some very nice chemistry.

Finally, Herschel learns Ava’s secret. Ava takes him to Hell and introduces him to her pets Bridgette Kerkove, Nikita Denise, and Trevor, who almost immediately start pleasuring Ava. Bridgette breaks off of Ava to tempt Herschel into pleasure, as Nikita licks Ava’s pussy while having Trevor lick hers. Nikita also turns around to give Trevor a little pleasure while Ava licks her pussy, and then lets Trevor fuck hers. Herschel, meanwhile, does Bridgette Kerkove in each of her holes. Finally, both Nikita and Bridgette take their partner’s pops on their tits. It’s a borderline hot scene that has okay chemistry.

Bios are included for Julie Meadows, Ava Vincent, Bridgette Kerkove, and Brooke Hunter. Each bio includes a link to the star’s scene, other VCA credits, and a littler personal information. They’re nicely done, but unfortunately share some of the stale sameness that’s ruined VCA’s main menus. The photo gallery lasts almost two and a half minutes with seven seconds per photo. Each photo is full screen and looks extremely good. Trailers are included for all three Sopornos movies, which are also by James DiGiorgio, New Wave Hookers 6, Being with Julie Ashton, and the amazing The Devil in Miss Jones 6. There’s also a virtual tour, internet information, and contact information.

The behind the scenes featurette lasts 26 minutes, with camera work by Britt Morgan, who laughs quite a bit while filming as well as adding a comment here and there, and Jimmy D. There’s some amusing footage with James giving Herschel crap about getting married as well as a nice deconstruction of the poop shot. Ava Vincent also gives a few tips on things you can notice in adult films. There’s also some nice footage that focuses on both the scenes and the photos being shot. There’s even some footage of Ava getting her makeup put on for the final scene. It’s a nicely done behind the scenes that does a good job of feeling like it captures what’s going on all around the set. The main complaint I have about it is that the stars are never identified, which is a great touch for any fans who aren’t familiar with some of the stars.

Finally, there’s a full length commentary with director James DiGiorgio and producer Rob Spallone. James and Rob play extremely well of each other, both sounding very Italian, with Rob playing the idiot and James playing the genius. There’s quite a bit of humor through the entire commentary, and the guys seem to be fairly honest about the talent. There’s even a surprising mount of darker humor. There aren’t many commentaries when you hear the people wondering if the girls can feel the guys in them after being in the business a while. They’re just as up front about the guys, and even talk about bringing in stunt dicks. They also talk about some of the technical aspects, such as the lighting, music, and the camera angles. Although the commentary has a lot of the same type of information most other commentaries have, James and Rob’s style sets it apart very nicely, as well as they’re not seeming to be afraid of talking about most anything.