The story resolves around Artos, the young son of Baron Amalric of Cravant, a small fiefdom within the Holy Empire, the dominant power in a world called Orbis. The Holy Empire is a theocratic state (seemingly an amalgamation of the Roman Empire, Holy Roman Empire and the Papal States) devoted called a deity called 'The One God'. It is ruled by a spiritual and militant leader, the Patriarch and the Holy Protector respectively. The new Patriarch, Icthyus Granitas, is cruel and corrupt and the Holy Protector is nothing more than his henchman. As soon as he came to power he began charging all those who speak against his rule with false charges of heresy and treason to the state. These lords either changes their minds overnight about the Patriarch or else disappeared entirely.

Cravant is one such state. On the first level of the game, Cravant is invaded by the Empire, who kill Artos's father on a trumped up charge of treason and raze the city. Artos flees with a small band of loyal soldiers across the sea to Angland (a fictionalised England) where he plots his revenge against the Empire.

From there, the player can decide how they do this. There are three 'alignments' that the player can choose from that are listed below. These are Pagan, Imperial and Renaissance.

Succubus is a unit available to Pagan players through the Henge (which are constructed by the High Priestess). Succubi are able to charm enemy units, thus making them switch to the player's side, possess a unit and make him commit acts of heresy to stop opposing peasants from working, and send enemy units into a rage, where they will attack anyone near them. 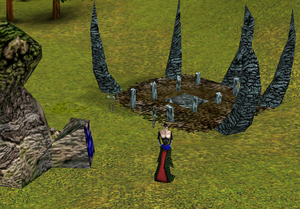 The Pagan path is one of superstition, witchcraft, and nature worship. Pagan war involves cheap mass-produced units in combination with indirect damage to one's opposition. The successful pagan player is one who tests enemy borders on a regular basis and then moves to overwhelm it while not counting the cost. Pagan signature units are its demons and witches, all of which have a series of secondary powers and spells to employ against their foes. Once they have become suitably advanced the Pagans may construct a Wickerman and summon a demon called Abaddon, a powerful AI controlled unit that can cause a lot of damage before being destroyed.

In Warrior Kings: Battles one of the opponents is Nikikla the Succubus who is found in the land of Akaia. Like all enemy leaders in the game her story is explained in the lore before the mission:

Nikikla (meaning She who has the fatal gift of beauty) was summoned to Orbis some years ago, and she liked it so much she decided to stay, Why? Because it was Full of foolish males who were easily dominated by her charms and wiles, There is more to Nikikla than your ordinary, run-of-the-mill succubus, For she has ambitions of power and wealth, to be more than just a temptress of men, but to be a ruler of men, and she is prepared to use any means available to her to achieve this goal.

It wasn't long before she had brought many powerful men under her spell, turning them into docile lapdogs, ready to do her every whim in return for a smile, or a pat on the head and a peck on the cheek. Mighty warriors and hard-bitten killers of men were turned into swooning love-fools, fawning at her feet, and trying to outdo each other in their attempts to impress her.

Now she rules over a substantial tract of land, with a small army of soldiers ready to obey her every command, and she is looking to expand her dominion further, both over the hearts of men, and the lands of the Empire, Nikikla has also Forged an alliance with a group of pagan High Priestesses who are sympathetic to her ideas.

They are engaged in constructing Henges in her domain, through which more of Nikikla's sisters are summoned From the Otherworld to serve her. With an army of utterly loyal veterans, and a regiment of Succubi behind her, Nikikla is a Formidable adversary.

Recently, she was able to storm and sack a city by using the simple. phrase 'Genghis, dear, be a sweetie, and take that city for me, there's a nice boy,' Within a matter of hours, the walls had been scaled, the defenders put to the sword, and the city torched to the ground.

She will not rest until she has earned the title 'Empress oF Orbis, and Queen of the Succubi', Nikikla the Magnificent.