Succubi in the Ultima Online massively multiplayer online role playing game are a type of female demon of considerable power.

A female daemon type. Succubi are known to lure innocent men by charming them with their appearance. Don't let their fragile appearance fool you. A succubus can take on a blood elemental and a daemon at the same time and survive. Succubi have a dangerous aura around them, if you are within 2 squares they can do 10-40 damage from their aura (the same as fire gargoyles and snow elementals, but much more dangerous).

There were a number of monsters planned for the never-finished Ultima X. Their design sketches and renders had been released, so there is a catalog of the more or less prominent monsters that were planned. One of these was a reworking of the Succubus in the game. 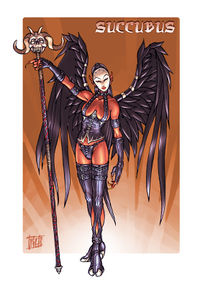