Succubi in the The Witcher 2: Assassins of Kings role-playing video game are represented by a single Succubus character that can appear in one of the side quests that are available for players to follow. This quest is known as With Flickering Heart.

The With Flickering Heart quest is obtainable only by choosing to follow the At a Crossroads: Scoia'tael quest line.

You can start the quest after the council meeting in Verden with Saskia and rest of leaders. The quest is given by an elf, Ele'yas, in front of The Cauldron, the tavern near the notice board. Before proceeding to the catacombs, remember to buy surgical tools from Felicia Cori in Rhundurin Square in Vergen. This quest item is necessary to gather evidence from one of the bodies in the catacombs, the fresh corpse.

After examining the body, find Dandelion at the inn to proceed. After that, proceed to the burned village at midnight to lure the succubus with a ballad. The lyrics should be the third sequence from Dandelion's poetry sketchbook:

Either side has its advantages but you may want to side with the succubus. If you have played your cards right you should already have a better weapon (Kaedweni black sword) and a Robust red meteorite sword. Although, the Kayran's chest piece could be considered better than Thyssen's armor, and you may want to go with the sword.

Quest is marked failed if not completed before showing Triss' bandana to Philippa.

And now let me tell you how I solved a crime in Vergen with a bit of help from Geralt, who started the whole thing by talking to the elf Ele'yas. Ele'yas thought he would need a witcher, but had no idea that a poet would prove to be key to the case! Young men, both elves and humans, were being murdered in Vergen. The elf said their bodies were being found near a burned village located at the mouth of the gully leading to Vergen, and subsequently being interred in catacombs beyond the town. Geralt took it all in and began to wonder if he should go to the crime scene or the burial site.

As Geralt searched the burned village for clues, he could not help but notice a pervading scent of sulfur, a scent so characteristic and strong that it obscures all others, as I'm sure you know. Odors at the site of a fire are nothing unusual, but the added scent of sulfur can mean only one thing to a witcher – that a succubus is or was near. Finding no other traces of the beast, however, Geralt noted his suspicion and set off for the dwarven catacombs to pursue his other lead.

The witcher examined the bodies of the victims and, based on his professional knowledge, concluded that the a (sic) succubus had killed the men. Also, Geralt found a book, a tome of my poetry, on one of the corpses. Whosoever doubted that humans and beasts alike admire my oeuvre and love me, should doubt no more, as this was proof positive of my fame. In any case, the witcher had hit a dead end and came to talk to me.

The book the witcher found had been stolen from me some time before. Needless to say, I was glad to recover it. This clue suggested that the succubus was an avid fan of poetry. Thus, I had no choice but to return to the village to lure the beast out with some moving lyrics. As many an epic romance states, and as Geralt reassured me, succubi are nocturnal creatures, so the witcher and I agreed to meet at midnight. 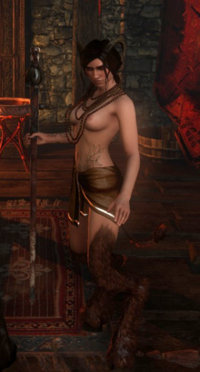 In folklore, a succubus (plural succubi), is a demon who takes the form of a highly attractive woman to seduce men (although the attractive part is a modern invention, historically succubi were ugly), in dreams to have sexual intercourse, according to the medieval European legend. Its male counterpart is the incubus. They draw energy from the men to sustain themselves, often until the point of exhaustion or death of the victim. In The Witcher saga, Regis had a romantic relationship with a succubus while he, the witcher and their companions were in Beauclair.

Succubus is a secondary character in The Witcher 2: Assassins of Kings. She is part of the With Flickering Heart quest in the game.

The torched village near Vergen proved to be the home of a real succubus. This beautiful creature, possessing hooves instead of feet, drew handsome young men to it in order to seduce them and feed on their life forces. The seductress was accused of brutally murdering many young men, and the accusation seemed to be solid. For you must know that the unpleasant scent of sulfur is not the sole inconvenience one must endure when encountering succubi, which can be as dangerous as vampires.

The Succubus' Wand is an additional weapon that can be obtained by players in the With Flickering Heart quest. In order to acquire the Succubus' wand, Geralt must choose to kill the Succubus during the quest. Afterwards, the wand can be looted from the Succubus' corpse.