The ABC television series The Gates has one character in it who is a Succubus. This article focuses on the powers and other general aspects of Succubi in this series.

For further on Andie Bates, the Succubus of the series, see her article in the SuccuWiki here. For more on the the series The Gates, see that article here. 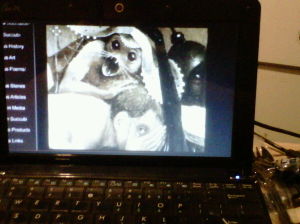 A screenshot of a search by Andie Bates on her computer for what Succubi are in the series.

Succubi generally look like normal humans, save for being more attractive than average humans, which might be part of their general genetic make up. They have a rash, as well as a series of large black or greenish coloured veins that appear on their back permanently, thus being a marker of them being a Succubus. They grow in size when feeding on energy from another person's body. It is not clear if this is only in the case of half-succubi or if all Succubi have that on their bodies.

Andie, that rash on your back, that is not a good sign. The more depleted your body gets, the larger it'll grow. And the more you're gonna feel compelled to find a source of life force to replenish yourself. --Doctor Peg Mueller 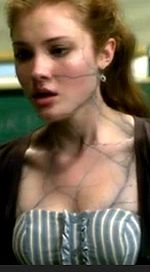 Andie showing the evidence of Succubus Veins over her body.

Succubi have a problem regulating energies within their bodies. Over an unknown amount of time, their bodies lose energy and they go out of balance. Eventually that balance swings to the point that they need to replace the lost energy or die. As their need for that energy increases over time, it appears to make the evidence of their being a Succubus, that the black and green veins over their bodies, to increase dramatically. It is assumed that they do not have the power to alter their appearance, something the traditional Succubus can do. It also must be assumed that they do not have any kind of attractive powers to others, other than their appearance. As well, it appears that they have no real effect on women, good or bad either. When they feed, they take the life force from their victim. This allows the Succubus to balance out her body's needs for energy making them feel rejuvenated. Their victim loses that energy and depending on how long they are intimate with the Succubus results in them feeling sick, passing out, or, in the worse case death. As they feed, the black and green veins on their body transfer to the person they are feeding on, eventually covering their body completely. When the feeding ends, the veins disappear once the Succubus breaks contact with them. As well, the veins reduce upon the Succubus' skin to the point where they are barely noticeable.

Andie Bates proves that it is possible that a succubus and a human can have offspring together. It is unknown if all offspring of such a combination will always be a Succubus, or if there can be Incubi in some cases, or if it is possible for them to be completely human. It is also unclear how it is possible for the Succubus not to kill their mate at that time. Also, assuming that Incubi exist, it is also unclear whether an offspring born of Succubi and Incubi is possible, what they would be, and whether or not their powers would appear sooner or later in their lives.

It's currently unknown if there is any sort of cure to being a succubus. Doctor Peg Mueller believes she might have created a herbal product that might be able to repress the needs of a Succubus to feed, however because it made Andie Bates feel sick, she stopped taking it for a time. The side effects of the medicine may be too overwhelming over time for the Succubus, and that might mean it is not a suitable method of control for them. Mrs. Bates was able to manage to control her powers for a time. However the need to feed was to great for simple willpower and eventually she couldn't control herself. That lead to her attacking her husband and nearly killing him. In the end, Thomas Bates had to kill his wife to stop her. Mia Mueller at a later point in the series gives Andie a remedy containing Devil's Weed created by Devon to help her. While it seemed to work, we are unsure of its long term beneficial powers as Brett swapped the remedy for water, thus making it ineffective and causing Andie to feed on Charlie to the point of almost killing him.

With the appearance of Andie Bates and her Mother as Succubi, that proves that Succubi exist in this universe. The question that needs to be answered is, if there are Incubi as well. There is no evidence of Incubi in the series within the episodes aired. It is also not clear if it is possible for Incubi and Succubi to mate in this series or not. It is also not clear if that would make the powers of a Succubi or Incubi child appear sooner or later as a result. Several other questions are left unanswered for the moment as well such as:

Important Episodes on the Series

The following are episodes in the series where evidence of Succubus powers being used are seen or when Succubi in the series exhibit noticeable traces of what they are.

More detailed information on the individual episodes can be found here.