Pirate Maidens is a downloadable video game for iOS devices developed and released by Aeria Games Europe on November 8, 2012. The game was described as a free-to-play anime-style trading card game, but there were in-app purchases available to add abilities and options to the game. The game featured strategic combat play mixed with an underlying adventure story. There was also a player vs. player option within the game as well. The game has not seen a new version since October 2013 when it was ported to iOS 7 and appears to no longer be in development.

The theme of the game was to collect a crew of various female pirates of different abilities and types to create a crew to control a pirate ship and then battle with other ships. By unlocking new cards, adding traps and other options, the player's ship would increase in strength over time.

As part of this video game, an event appeared in February 2013 called Dungeon of the Succubus and as part of that event a new character named Succubus Hadeel, also known as Demona Hadeel, was added to the game.

Dungeon of the Succubus 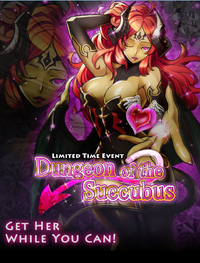 Promotional Image for the Dungeon of the Succubus event

The Dungeon of the Succubus was a special event that occurred between February 14, 2013 and February 28, 2013. During this event players conducted a series of raids and adventures that cumulated in the appearance of the title Succubus of the event known as Succubus Hadeel. As players progressed through the stages of the event, various abilities and rewards were given. At the end of the event any special statistics connected to the event were hidden from normal gameplay although the Succubus Hadeel character, if collected, would still appear.

The random events in the dungeon are very similar to that of the normal story mode:

Succubus Hadeel was the final Dungeon Boss to be overcome in the Dungeon of the Succubus Event. She was described as being a demon who used illusion to manipulate the minds of humans. She loves to make people suffer, and feeds off their pain.

Demona Hadeel was the final Dungeon Boss to be overcome in the Halloween Madness Event. She was described as being a demon who thrives during Halloween. The fear in others only grants Hadeel more power while she feeds off of their souls. This character was a special version of Succubus Hadeel that only exists in the English version of the game.