Succubi in the Heroes of Might and Magic VI computer role playing game by UBSoft are a Core creature of the Inferno faction, and the creature's upgraded version is the Lilim. 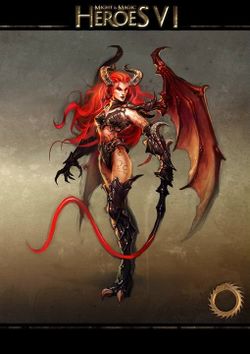 Official Heroes of Might and Magic VI artwork of a Succubus

Some children of Asha, having promised themselves to Urgash and the lords of Sheogh, are raised after their death as Incubi or Succubi. As reincarnations of powerful Demon cultists, they have a relatively high and unusual rank in the hierarchy of Demonkind, though many of them lack the wit, devotion, or power to be anything more than servants or courtesans. Their “mortal” origins make them useful as spies, infiltrators, and diplomats, and to support this role they are granted powers of illusion, charm, and shape-shifting.