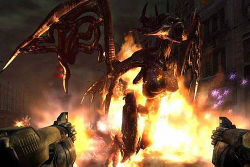 Succubus being attacked in Hellgate

Succubi in the Hellgate online role playing game are flying demons and are never seen walking within the game. They have the bodies of voluptuous human females with the faces of horrible demons.

Flying through the Burn-darkened skies on leathery wings, the Blood Angel announces her presence with a blood-chilling scream and then rains death down from on high. This demon can both unleash bolts of spectral energy or swoop in and use her vicious talons to rend and maim her victims. The runes in her skin burn with crimson intensity, both denoting her rank amongst the minions of Hell and marking her as one of the True Demons. Extra care must be taken by those heroes that favor melee combat as the Blood Angel uses her mobility and flight to great advantage.

Succubae in Hellgate: London are true flying demons, and have never been seen walking; always flying. They have the bodies of voluptuous human females with the faces of horrible demons. Succubi prefer dive bomb attacks, and tend to fly around just out of range of melee weapons, making a pistol or Grappler a good choice for a weapon switch when they're around.

Blood Angels are basically demonic harpies, flapping around and zooming down to slash at your head with their talons. They aren't hugely damaging, but tend to flap around out of reach, and can be quite annoying if your character was fool enough not to select a good pistol or rifle for one of their weapon change slots. Though the official game fiction lists "spectral bolts" as a property, they have not been seen using this ability.