In the Dungeons & Dragons fantasy role-playing game, a Succubus is a female demon, or, under 4th edition rules, a devil. The objective of succubi is to tempt men to have sex with them. They do this for their own purposes, and it typically yields a dead mortal or a pleased demon lord (in some cases, when succubi are used as assassins, both ends result). The male equivalent is an incubus.

The succubus is based on the succubi from Western medieval legend.[1]

The succubus appeared under the demon entry in the Eldritch Wizardry supplement (1976).[2]

The succubus appears in the first edition Monster Manual (1977).[3]

In this edition, demons became known as tanar'ri, with the succubus lesser tanar'ri appearing first in the Monstrous Compendium Volume Outer Planes Appendix (1991),[6] and then reprinted in the Monstrous Manual (1993).[7]

The succubus (tanar'ri) appears in the Monster Manual for this edition (2000);[9] in this edition, the name demon is resumed, and tanar'ri are now considered a sub-type of demon.

Savage Species (2003) presented the succubus/incubus as both a race and a playable class.[10]

The succubus appears in the revised Monster Manual for this edition (2003).

The succubus appears in the Monster Manual for this edition (2008), although in this edition, succubi are classified as devils and appear under the "devil" entry.[11] A great many succubi were stranded in the Abyss at various points of the Blood War - these were corrupted and became ferroliths and incubi.[12]

The succubus appears in the Monster Manual for this edition (2014), and are classified as Fiends. It is noted that Succubi and Incubi are the same type of being. A succubus can become an incubus, and vice versa, though most have a preference for one form or the other. Mortals only rarely see a succubus or incubus in its true form.

The objective of succubi is to tempt men to have sex with them. They do this for their own purposes, and it typically yields a dead mortal or a pleased demon lord (in some cases, when succubi are used as assassins, both ends result).

Succubi are native to the Abyss.

In the first edition of Dungeons and Dragons, it was established that a succubus shape changed into male form was known as an incubus. However, in the third edition of D&D, the succubus is the female form of the incubus (i.e. the succubus and the incubus are the female and male manifestations of the same type of demon). The creation of incubi as a separate demon type was featured during the Fourth Edition events of the Blood War.[13] 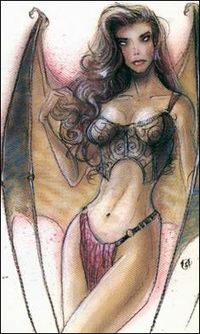 Succubi are tanar'ri demons, and they are quite numerous. Many are under the command of the Abyssal Lord Graz'zt, but most are ruled by their "Queen," Malcanthet. In Dungeons & Dragons the female child of a succubus and a human is traditionally called an "Alu-Demon" and the male child a "Cambion" (though the latter term can be applied to any demon-mortal offspring). However, the offspring of an alu-demon or cambion, as a result of a union with a human, has no specific name but falls into the larger category of tiefling. Succubi are featured prominently in the Planescape games.

Under 4th edition D&D rules, the succubus is a devil, and its alignment is evil. Succubi serve more powerful fiends as spies or assassins.

Fall-From-Grace is a succubus, a notable character from the Planescape: Torment computer role-playing game.