Succubi in the Confrontation tabletop role playing game by Rackham are the demonic representation of seductive evil in all its forms. Confrontation is based on a universe of myths and legends, where warriors, magicians and fantastic creatures fight relentlessly and players are the commanders of the armies within the game.

The appearance of these creatures known as the Succubi is undeniably alluring to the commoner, yet one must fear them like the plague. The demons called Succubi are not only enthralling, they are also wicked beyond imagination and they will use every bit of cunning they have to achieve their goal.

Their ability to fly added to their fighting skills would be enough to convince anyone of the danger these minions of Darkness represent. But their great force is invisible to the eye: The Succubi are also accomplished magicians whose skills are particularly deadly to individuals of the male gender who they render totally unable to fight.

Accordingly it is strongly recommend that they should be systematically hunted down and eliminated. Moreover, individuals holding capital information concerning the crusades be assigned to the close protection of exorcists licensed to destroy such impious creatures.

Daughters of darkness, the Succubi are demons that materialize under female shape to torment mortals and feed on their vital energies. To do so, they resort to seduction and charms of typhonism. Their victims are literally enthralled by their demonic beauty, abandoning themselves to a whirlwind of pleasure. Once the ecstasy has past, a wretched soul and the acrid smell of sulfur are all there is left.

The succubi are immortals of Darkness that can appear with the Ophidian alliance, the seers of Caer Maed, the disciples of the Beast, the empire of the Syharhalna, the limbos of Acheron and the possessed of the Abyss. 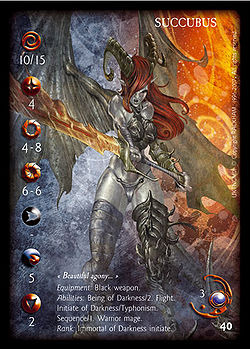 One type of Succubi have Sequence/1 (ATT/STR 4/8, DEF/RES 6/6) and Flight. They are also warrior mages (POW 3, Initiate of Darkness/Typhonism). The Succubi also have two typhonism spells: Beauty of the Devil and Submission (Spells worth 10 A.P.)

Another type of Succubi has Sequence/1 (ATT/STR 4/8, DEF/RES 6/6) and Flight. They are also warrior mages (POW 3, Initiate of Darkness/Typhonism). The succubi also have two typhonism spells: Impotence and Petite mort (Spells worth 10 A.P.)