Succubus: Hell-Bent is a 2007 direct to DVD American horror thriller movie starring Gary Busey, David Keith, Lorenzo Lamas, R.L. Mann, Kelly Hu and Natalie Denise Sperl as the succubus Lilith. The film follows what happens when a man attempts to seduce a woman named Lilith, who is in fact a Succubus. When he leaves her, Lilith follows him, leaving a bloody tale of vengeance in her wake. 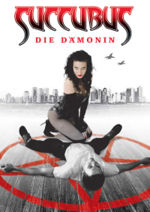 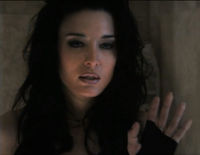 Natalie Denise Sperl as the succubus Lilith in Succubus: Hell-Bent

The tables are turned when a ladykiller meets a real-life succubus in Cancun in this horror film. Rich and spoiled, Adam (Robert Mann) will sleep with anything in heels. When he flies south for spring break, he continues his womanizing ways. He gets a lot more than he bargained for when he seduces Lilith (Natalie Denise Sperl), a beautiful demoness. When he returns to his life of luxury in L.A., Lilith follows him, leaving a bloody tale of vengeance in her wake.

The following film review is taken from Dread Central

Adam is a hedonistic trust fund baby from the Hollywood Hills who only seems to have four goals in life: getting laid, partying hard, becoming a rich & famous Hollywood director, and getting more laid. He has his own editing equipment at home that he spends more time using to edit his homemade sex videos of the not-so-bright beauties, sometimes two at a time, which he's bedded - condoms be damned. He's an arrogant brat who talks of being a filmmaker but makes it clear he's only in it for the fame and fortune - artistic merit be damned. It's like someone's made a movie where the main character is supposed to be a young Michael Bay. Actually, considering what a monumental poseur Adam proves to be, a young Brett Ratner would be apropos.

Whoever Adam reminds me of he's one of the least likable protagonists I've ever seen. How unlikable is Adam? His reaction to discovering that he's been targeted by a centuries old succubus - a demoness who has already murdered people around him, murders he's been blamed for - is to blow off some steam by heading out on the town with his best friend for a night of further club-hopping and carousing. The only things that make this Adam character sympathetic in the slightest are his icy relationship with his father and that he finds himself being blamed for the murders that the angry demoness going all Fatal Attraction on him is responsible for. This ultimately causes the film to slump a little during the final showdown between Adam and Lilith because not in a million years is Adam a character that anyone could really root for unless you're the sort that thinks the Paris Hilton's of the world are actually cool.

Now that I think about it, the movie never quite makes itself fully clear as to whether the succubus is after Adam because she genuinely doesn't like be used and tossed aside or if she's just evil and intended to make his life hell from the get-go. I'm thinking it's the latter, but the movie is never 100% clear. She's a fun villainess, but that ambiguity and the way the movie eventually seems to want us to sympathize with this over-privileged man-whore is the weakest aspect of the otherwise infinitely watchable, albeit instantly forgettable, cheesefest entitled Succubus: Hell Bent.

Adam and his best friend Jason head down to Cancun for Spring Break. One sexual conquest leads to another, and soon Adam sets his sights on a mystery femme named Lilith, whose husky-voiced alpha female demeanor and overall strange behavior should have instantly tipped him off that this woman was going to be trouble even if she weren't Adam's wicked first wife from the Garden of Eden on the prowl through the ages looking for soul's to suck. A night of rough sex and that cad Adam is headed back to Beverly Hills to his life of luxury, dimwitted girlfriend, and all the other bimbos he continues to bed when the girlfriend isn't around. All is well for Adam until Lilith sashays back into his life for some more rough sex followed by a reign of terror.

At first Adam thinks Lilith is just some obsessive psycho bitch, but then he freeze frames the sex video they made and notices that this dark-haired beauty he picked up for a one-night-stand South of the Border sprouted a pair of demon wings at the height of orgasm and realizes that he's now got satanic psycho bitch problems instead. She begins stalking him on land, in the air, in his dreams, and even on his computer screen. Of course, who in their right mind is going to believe him when he tells them he had sex with a satanic succubus and now she's out to make his life hell? Thank goodness for the Internet!

Adam finds a website with a page devoted to Lilith with graphics worthy of an Internet comic book; a site that turns out to be the official website of Sentinel, Demon Hunter for Hire, which also sounds a lot like a comic book, but turns out to be a California-based demon hunter. Enter Gary Busey looking and sounding as loony as he ever has, dressed like a black leather clad Crocodile Dundee-type, driving a customized truck pimped out with skull designs, and carrying a sword he calls "Lucille" that would make Skeletor envious. He turns up just long enough to give Adam the 411 on his succubus problem and to provide him with some stuff that might help: a parchment with instructions on how to deal with her, an amulet for protection, and an anti-Lilith kit consisting of a crossbow gun, a six shooter with silver bullets, nunchuks, and holy water. But he can't be bothered to stick around and help this punk slay the demoness because he's already got a gig booked elsewhere to battle a daywalking vampire. A pity because while it's a brief cameo, I found myself wanting to see a Sentinel, Demon Hunter For Hire movie, if only to see how much crazier Busey could get when having to play opposite the sexually-charged, scene-chewing hellcat.

Brief appearances by more well-known actors are something this movie has quite a few of. The most prominent being David Keith as Adam's government contractor gazillionaire father, a heartless prick that orders Adam to attend the memorial commemorating his mother's death but can't make it himself because he's got more important things to do - namely business meetings and sleeping with his secretary. I kept waiting for Lilith to go after him too, something that never happened, possibly because he himself didn't seem overly fond of his own son.

Hottie Kelly Hu turns up for a whopping two scenes cast against type as a hard-as-nails homicide detective investigating the murders surrounding Adam. Given how hate-filled she sounds when telling Adam how he's going to get the death penalty for the murders she thinks he's committed, you'd think she was one of his sexual conquests that he bedded and never called again. She sounded more hell-bent to destroy Adam than the succubus.

Lorenzo Lamas plays a pilot that works for Adam's father. Adam himself is a pilot and the two like to go up in these fancy mock fighter jets to mock dogfight. Along comes Lilith one day to take a plane up herself to stick it to Adam by displaying her own aerial combat skills in a confusingly edited scene that goes on too long and is kind of hard to figure out just who's doing what since everyone's plane looks exactly the same.

Awkward transitions occasionally plague Succubus: Hell-Bent. Writer/director Kim Bass is able to cover-up the film's obviously low budget most of the time with vibrant locales, but several of the scene transitions still reveal the film's shortcomings. For example, one moment Adam is having a drink with Lilith and suddenly it abruptly fades to them in a hot tub together as if they just teleported into it mid-conversation. Well, maybe they did, at least Lilith is established to have teleportation powers. Scene transitions like this feel like they're missing an establishing shot of some sort.

And I must protest, for a movie in which sex plays a key role and a cast overflowing with beautiful babes, there's precious little nudity on display. That just seems odd to me. If you're going to make a movie like this R-rated then there's really no need to skimp on the T&A.

Still, can't complain too much. Succubus: Hell Bent is a fun little flick that breezes by even if it does occasionally feel as if it's holding back on going completely over the top - no boiling bunny moments in this Fatal Attraction. Clearly played for laughs at times, only really hurting when it tries to take itself seriously or thinks it can actually make us feel empathy for this spoiled dickweed; you'll probably forget all about the movie ten minutes after watching it, but you'll still be entertained as you do so.

Stick around for the bloopers in the end credits just to see some great footage of Gary Busey just being nuts. I so want to see a Sentinel, Demon Hunter for Hire movie now.