Sharisha is a succubus in the Virtueverse role playing game created by DvSDragon. While she is a Succubus, she does not live her life as one, preferring to appear and act as human as possible and not give into her demonic nature.

Sharissa is a demon and a succubus at that, she has the ability to invade the minds of her victims implanting thoughts, images and even in severe cases control and trick the sub-conscious mind. She also has the power to shapeshift and use magical reinforced spells that she has learned to boost her sexual allure and seductive traits.

Even though she is who she is, she usually prefers just to stay as normal as possible and when not in her true demon form fight with just two blades, and her natural ability to withstand about anything that gets thrown at her. 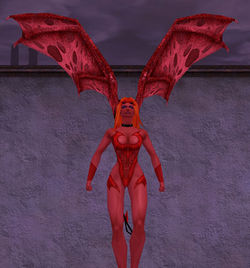 As any Succubus she is born after her mother found herself a potential mate and extracted his seed in a most pleasurable but very deadly outcome. After birth her mother passed away, and she was taken under the wings of Lilith, Mother of all succubi. Where she was taught their ways until she became old enough to enter the world of the living and pray on victims just like all succubi. Due to unforeseen circumstances she has never taken a soul or reproduced, simply because of the reason that there is one rule most important to all succubi which is never ever to fall in love with anyone.

One day when Sharissa went off to find herself a potential mate, she landed on a roof overlooking a window of a bedroom, a fresh young male sleeping deliciously just waiting to be taken. When suddenly she was attacked from behind by a flash of a shadow that pushed her of the roof, quickly recovering her fall by spreading her wings in mid-flight she turned around only to see the shadow crouched on the edge. The shadow pounced at her and dragged her down to the streets because of the combined weight she couldn't handle all of a sudden, once landed beneath the streetlights the shadow became very clear. A blond, blue eyed cat-girl stood on top of her, claws extracted, ready to attack again. Sharissa just lay there looking at her with amazement, shielding her body with her wing as she asked what her name was and why she attacked. To which Tilly answered saying she had to stop her as a demon from claiming the life of that man that was sleeping.

After a long argument and a temporary peace treaty, Sharissa fell in love with her and was actually growing extremely fond of her, though she had realized she had broken the one rule. Sharissa decided to never come back to her world and instead live happily on earth with Tilly, also promising not to take another soul or use her powers for her own gain. After a few long years Tilly was never heard of again for unknown reasons and Sharissa was almost completely living a normal human life, almost forgetting who she really was.

Since then she had been trying to find another way of living her life and has a weakness for catgirls which might cause her downfall one of these days. 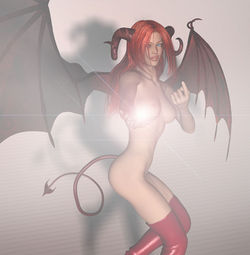 Even though being a succubus or a dominant sex demon, Sharissa is not really dominant at all. Because of the way she chose to live her life she has changed a lot in that aspect, so she can come across more as a sweet kind girl!