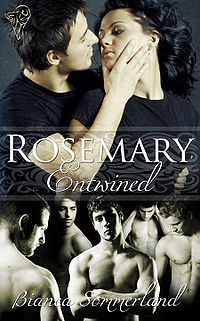 Rosemary Entwined is an eBook written by Bianca Sommerland. It is the first work in the Rosemary series by this author. In this work the character Rosemary is a half Succubus. The work was reissued in 2015 and the reissue contains the second work in this series Rosemary and Mistletoe.

One kiss might save her, but if Rosemary has to lose even one of her men, she doesn’t want a prince.

The only role of Rosemary's nest of men is to feed her insatiable hunger for lust, but that's not what she wants for them. Or what they want from her. While Rosemary presses for them to live their own lives, they each find ways to steal into her heart. With the threat of her mother's nest hanging over them, Rosemary decides to surrender to the love they offer and focus on building their combined strength to stand against the inevitable attacks.

When her control over her powers slips, another problem arises. The nest is incomplete. A prince must be chosen, and if he is not among her men, she'll be forced to let one of them go.

She once feared her heart wasn't big enough to hold them all. Now she fears she's not strong enough to release even one. Even if it costs her her life.