Rick Howland is a Canadian actor best known for his role as Trick on Lost Girl and Harry Buttman (a parody of Gary Bettman) in Bon Cop, Bad Cop.

Currently, Rick Howland plays the role of Trick in Lost Girl, which is in its third season. He also played the role of Harry Buttman in Bon Cop Bad Cop, and played icon Jayne Eastwood's son in Endless Grind. Howland began his career with improvisation before landing his first role in the feature film To Catch A Yeti opposite Meat Loaf. While at York University, he formed the comedy troupe The Four Strombones. The Strombones performed in comedy clubs around Toronto for more than a decade and also created a very successful fringe show in 1994. He has hosted comedy shows as well as dabbled in standup comedy. He has co-written a sitcom called Rick’s Life with Adam Nashman, which is an industry based show that offered views through Rick’s own unique perspective. He has written and directed a short film, the award winning Underwritten for the 48 Hour Film Festival. He has also been a songwriter since age seventeen. He has two self-recorded albums available on iTunes as well.[1] 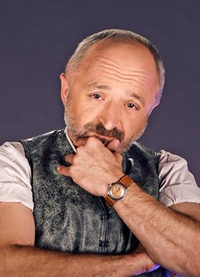 He plays the role of Trick, a very important character in the series as he is the source of everything that is told to Bo about the Fae world. His main role in the series is being the owner of the Fae neutral pub called the Dal Riata. It has been revealed that Trick is Bo's grandfather during the run of the series and that he was, at one time, known as the Blood King.