Races with Class: The Succubus is an article that appeared on Necromancers Online and was authored by Alex Riggs. The article showed one method that could be used to give a player character Succubus powers, abilities, and background.

Succubi (and incubi, the male equivalent) are among the most dangerous and vile breeds of demon. Not because of any of their physical features—indeed, they go far out of their way to ensure that their appearance is appealing—but because a succubus’ whole existence is to twist and corrupt mortal souls, especially those which are pure and clean, tainting them with the foul evils of the abyss and turning those souls to dark and evil ends.

Succubi are lovers, not fighters. Whenever possible, they prefer to avoid combat, instead using “diplomacy” to twist her friends and foes alike around her finger until they dance to her tune. She uses her high Charisma and Bluff skills for this, as well as her wide array of charm related magical powers. If pressed, succubi are surprisingly capable of defending themselves, as they are possessed with a natural affinity for draining the life force of others through mere touch. 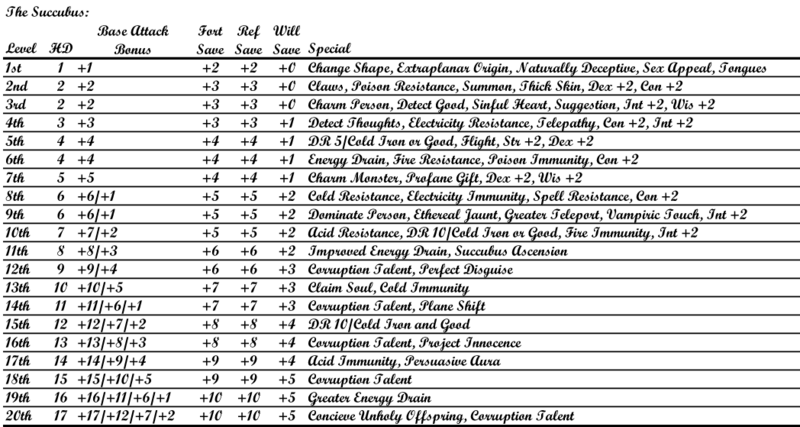 This ability is optional, and a succubus can choose not to activate her energy drain ability when engaging in an act of passion, though they typically find the experience less enjoyable if they hold back in this fashion.

Further still, a succubus can use this ability on any creature benefiting from her Profane Gift ability at any time, regardless of distance, so long as both she and the target are on the same plane of existence.

A succubus who uses this ability immediately gains 7 negative levels, even if she would normally be immune to negative levels. These negative levels automatically go away at a rate of 1 level per day, though the succubus can remove them faster with spells like greater restoration. This is another reason most succubi are conservative with their wishes.

A succubus must be at least 17th level to gain this corruption talent.

When a succubus revokes a greater profane gift, instead of causing 2d6 Charisma drain, she may choose to have the subject gain 1d4 negative levels for each class level she had granted, to a maximum number of negative levels equal to the creature’s hit dice -1.

Similarly, the succubus can choose to provide a false result to creatures which use detect thoughts or similar abilities on her, usually to trick mages into believing her sincerity. As with the false alignment, the diviner is entitled to a Will save to see through the illusory thoughts, though success does not grant access to the succubus’ actual thoughts.

As long as the child is not a demon, he or she still resembles his or her parents, though the fiendish taint may be clear even from birth. If the child is a demon, the type of demon depends on the number of hit dice of the higher-level parent. Demon children appear hideous and misshapen at birth, and grow at a rapid rate, becoming fully mature in 1d4 hours. During this time, they are notably less powerful than they are when fully matured.