Midrash Express is a novel written by Nathyn Brendan Masters. In this novel, Succubi play a central role to the plot of the story. 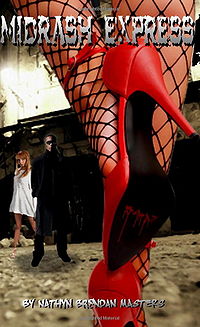 The year is 2050 and cars still don't fly. After his temp assignment at a Jewish charity organisation ends, Victor Locke goes back to his night job. But when his immediate supervisor Maya Abraham, tells his she knows what his night job is and offers him two thousand dollars cash to simply pick up some documents from an antiques collector in Bucktown, he accepts.

It sounds like a simple retrieval, but Victor knows better. No one pays that kind of money for a retrieval unless it's contraband or it's going to be dangerous. He completes the job with no hindrance and gives the papers to Maya.

But when Maya and the documents disappear, Victor is the target for several different entities all looking for the same thing, the missing sections of a Midrash said to have a thousand proper names of a thousand succubi and the key to bringing Lilith, the mother of all succubi back to earth incarnate.

Aided by an ex-priest named Luke Matthews, a family of Jewish vampire hunters called the "Sons of Eden" and the beautiful Rebecca Jacobson, the daughter they disowned when she became a magic user, Victor has to do battle with ghouls, vicious vampires, murderous witches, impetuous watchers and a corporal succubus with way too much time on her hands, to save Chicago and the world from a demonic plague.