Mephistopheles flying over Wittenberg, in a lithograph by Eugène Delacroix.

Mephistopheles (/ˌmɛfɪˈstɒfɪˌliːz/, German pronunciation: [mefɪˈstɔfɛlɛs]; also Mephistophilus, Mephistophilis, Mephostopheles, Mephisto, Mephastophilis and variants) is a demon featured in German folklore. He originally appeared in literature as the demon in the Faust legend, and he has since appeared in other works as a stock character version of the Devil.

In the Faust Legend 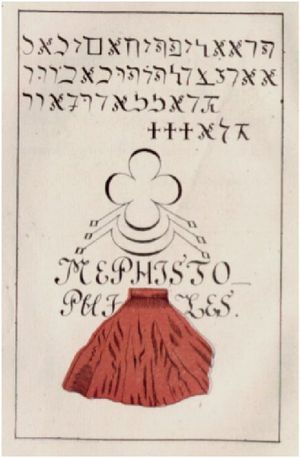 The name is associated with the Faust legend of a scholar — based on the historical Johann Georg Faust — who wagers his soul with the Devil.

The name appears in the late 16th century Faust chapbooks. In the 1725 version, which Johann Wolfgang von Goethe read, Mephostophiles is a devil in the form of a greyfriar summoned by Faust in a wood outside Wittenberg.

From the chapbook, the name entered Faustian literature, many authors used it, from Christopher Marlowe to Goethe. In the 1616 edition of The Tragical History of Doctor Faustus, Mephostophiles became Mephistophilis.

The word could derive from the Hebrew mephitz, meaning "distributor", and tophel, meaning "liar"; "tophel" is short for tophel shequer, the literal translation of which is "falsehood plasterer".[1] The name can also be a combination of three Greek words: "me" as a negation, "phos" meaning light, and "philis" meaning loving, making it mean "not-light-loving", possibly parodying the Latin "Lucifer" or "light-bearer".[2]

Outside the Faust Legend

Shakespeare mentions "Mephistophilus" in the Merry Wives of Windsor (Act1, Sc1, line 128), and by the 17th century the name became independent of the Faust legend. According to Burton Russell,[3] "That the name is a purely modern invention of uncertain origins makes it an elegant symbol of the modern Devil with his many novel and diverse forms." Mephisto is also featured as the lead antagonist in Goethe's Faust and in the unpublished scenarios for the Walpurgis night, he and Satan appear as two separate characters.

Although Mephistopheles appears to Faustus as a devil—a worker for Satan—critics claim that he does not search for men to corrupt, but comes to serve and ultimately collect the souls of those who are already damned. Farnham explains, "Nor does Mephistophiles first appear to Faustus as a devil who walks up and down in earth to tempt and corrupt any man encountered. He appears because he senses in Faustus’ magical summons that Faustus is already corrupt, that indeed he is already 'in danger to be damned'."[4]

Mephistopheles is already trapped in his own hell by serving the Devil. He warns Faustus of the choice he is making by "selling his soul" to the Devil: "Mephistophilis, an agent of Lucifer, appears and at first advises Faust not to forgo the promise of heaven to pursue his goals”.[5] Farnham adds to his theory, “…[Faustus] enters an ever-present private hell like that of Mephistophiles”.[6]