Lost Girl: An Evening at the Clubhouse

Lost Girl: An Evening at the Clubhouse was a special show that aired before the season premiere for the fourth season of the series. It was first shown on the Showcase Television Channel in Canada on November 10th, 2013 at 9 PM Eastern time. It was billed as a primer for the fourth season of the series and featured interviews with the cast and teasers of the upcoming season. It also replayed the Season 3.5 Webisodes for those that had not seen them on the Showcase.ca website. 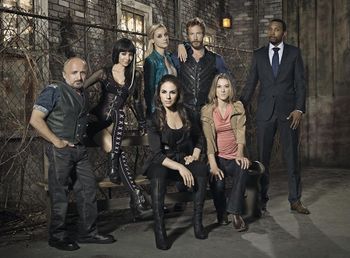 A promotional Image of the Season Four cast of Lost Girl from the official website at showcase.ca/lostgirl From left to right: Richard Howland as Trick, Ksenia Solo as Kenzi, Rachel Skarsten as Tamsin, Anna Silk as Bo, Kristen Holden-Reid as Dyson, Zoie Palmer as Lauren and K.C. Collins as Hale.

The special opened with Anna Silk welcoming viewers to "The Clubhouse" and the special. She then introduced the cast of Lost Girl as a whole followed by a short summary of the special which would consist of answering fan questions, some cast-on-cast interviews and watching the Season 3.5 webisodes throughout the special. She then asked the cast to introduce themselves, and they did so in the order of Richard Howland. Paul Amos, Rachel Skarsten, Ksenia Solo, Kristen Holden-Ried, Zoie Palmer and K.C. Collins before Anna Silk reintroduced herself.

Anna Silk noted that it had been some time since Season Three ended and she introduced a short series of clips from Season Three which showed excerpts from the season as a refresher for viewers, ending with the last image of the season which was the Wanderer card laying on the floor of the Dal Raita surrounded by glass shards. Upon returning to the cast, Anna Silk introduced her newborn son Sam and spoke of the time she had had with him before she took Sam away to bed. Ksenia Solo then spoke about the level of support Lost Girl has from its fan base. She then revealed what she called a "magical Fae box of questions" from the fans.

The first question asked the cast to talk about where they grew up and what they were like as a kid. Following the cast revealing some facts about themselves, the next question asked the cast which mythological creature they would like to be if given the chance. After this question was answered, the next, a video question, asked what effect Twitter had on the cast. Following their answers to this question, the special played the first webisode of Season 3.5, UPYURS6. Returning from the webisode, Ksenia spoke of her love for the relationship that Kenzi and Bruce show when they are together on screen before the special went to a commercial break.

After the commercial, the special returned with K.C. Collins taking the hosting duties for the next segment and asking Anna and Zoie the next question which asked their thoughts about the relationship that exists in the series between Bo and Lauren. The next question asked was who was the singer of the cover version of The Wanderer that was sung during the teaser commercials for Season Four, this being Emily Mover who was also the singer of the main Lost Girl theme as well. Following this, Rob Archer, who plays the role of Bruce in the series, made a cameo appearance to pour wine for the cast. The next question asked about who on the cast used Instagram the most, the cast voting that Ksenia, as she had entered her photography in a competition, was the winner.

A video question followed asking about the personalities of the cast on the set of Lost Girl. Immediately following the answer, [Richard Howland]] introduced the next webisode of Season 3.5. This was the episode Prophecy which was shown out of order as it was, in fact, the final episode of the webisode season to be shown. Returning to the cast again there was a short series of comments made before the special went to commercial.

Returning from the break, Kris Holden-Ried took over the hosting duties and asked the next question which asked the cast to tell what would they would want to feed from if, like Bo, they could only feed from a single thing. The next question asked the cast to recall memorable moments meeting fans of the series. Ksenia then revealed a fan-made doll that she called "Little Kenzi" which was to be auctioned for charity. Paul Amos then spoke of an encounter he had in Atlanta where a fan gave him a coin which, if he was to show the coin to a member of the military, would have to show their coin or they would have to buy him a drink. He then recounted an event in New York where he met a Lost Girl fan who was in the military and showed them the coin which resulted in that fan bringing him a beer. The next question asked about the cast's opinions of the relationship between Tamsin and Bo. Rachel Skarsten spoke of her love of the cast and how easy it was to have chemistry on screen with them and Anna spoke of the relationship being one of equals on screen. Kenzi then asked Paul what it was like to play Vex and hammed things up a bit before the next webisode, Red Tape was shown before the special again went to a commercial break.

Returning to the cast, Rachel Skarsten hosted the next segment, the first question asking the cast to finish the sentence: "This season is more..." The cast used: "Epic, Magical, Theatrical, More of the opposite of what you think you know, A lot more left than right, It's more circular than it has ever been, It's more less centre. Taller. A little wider. Sometimes it lies down, occasionally it sings." Much of the last comments being said in jest and fun. The next question asked the cast about balancing their personal lives and their professional lives, the cast describing the entire show as being their second family, but thet miss their real families when they cannot be with them.

Rachel then introduced a series of bloopers from the series which included scenes with Zoie, Anna, Kris, Rachel and Anna, Kris and Rachel, Anna and Ksenia, Anna again, and finally Richard. Upon returning from the bloopers, Rachel then said she had to leave to catch a flight as the special went to commercial.

Returning from commercial found Zoie Palmer hosting the segment and asking the next question which was if Kenzi and Lauren's backstory would be further revealed in the Fourth Season. Zoie indicated that there would be more about Lauren's background and Ksenia agreed there would be some reveals about Kenzi as well. The next question was a video question which asked asked if Kenzi and Lauren would be friends during the season. Ksenia teased that the "grumpy" phase of their relationship was over and that things might be better between them. Zoie then introduced the next webisode Getting To Know You: The Una Mens which was then shown. Returning from the webisode, there was a short commentary before the special went to commercial once more.

Upon returning to the special, Ksenia greeted viewers while she, Paui and Kris ate popcorn. She then read the next question which asked Zoie how difficult it was to learn the medical terms she used as Lauren and how the rest of the cast prepared for scenes. Following some answers from the cast, Ksenia asked the final question of the special which was for the cast to give a clue for the upcoming season. Anna spoke of the difficulty in speaking about the season because of the number of cliffhangers that would appear. Zoie stated that she felt that fans would not be disappointed in the season, and Ksenia spoke of the twists and turns and mysteries to be revealed as the season progressed. Zoie added that the fans would see the characters in ways they have never seen them before.

No Review as this was not an episode of the series.