Lilitu, in the Dungeons and Dragons fantasy role playing game, are a type of Tanar’ri who are similar in appearance, goals and actions to that of Succubi. Unlike the Succubi, Lilitu are not solely focused on the sin of lust but rather act as a temptation to mortals to commit sins and thus fall under the control or influence of the Lilitu.

Lilitu demons are subversive and hidden horrors, demons who work much more subtlety in their constant quest to destroy and devastate. Whereas most demons prefer to rend and destroy, the lilitu is more akin to the succubus—she labors in humanoid guise to infect society from within with sin. Known to some as temptation demons, lilitus enjoy little more than leading mortals into all matter of sinful acts, in the hopes that when the mortal perishes, that soul will fuel the Abyss. Despite some superficial similarities to succubi, lilitus are not solely concerned with the sin of lust. The exact nature of sin that a lilitu tempts a mortal into committing varies, for these demons are adept at reading mortal desires and secrets, quickly discerning which sinful acts a specific target can be convinced to perform.

Lilitus have numerous tools at their disposal for the encouragement of promoting sin, but they much prefer their humanoid victims to commit sins of their own free will. As such, lilitus generally use their abilities to deceive and beguile mortals rather than forcing them to execute these heinous acts. A son convinced to kill for his mother (the disguised lilitu) to rectify a grave injustice done to her produces more delight than simply mind-controlling a humanoid into doing such a deed.

Lilitus subsist on the profane joys of corrupting priesthoods and twisting the worship of the faithful to that of a particular demon lord. Their natures shield them from most forms of magical detection, and their ability to pose as powerful clerics goes a long way toward allowing them to gain an impressionable town’s gratitude.

Lilitu typically stand 6 feet tall and weigh 130 pounds. In one form, a lilitu appears as an eyeless, horned, sometimes snake-tailed—but otherwise beautiful—human woman. Another form that Lilitu are more commonly encountered is a lithe and graceful figure destined to inflame desire in those around her. A closer look, reveals sharp talons, vacant white eyes, and cloven feet, distorting and perverting that beauty into something far more disturbing. Despite their lack of eyes, a lilitu can see with supernatural ease. Four writhing, ten-foot-long, sting-tipped tails extend from her back and burnt and broken fragments of wings appear as well. Lilitu lose their wings in the transformation from succubi to lilitu, but retain the burnt and ragged tatters of their wings. Lilitus can be encountered anywhere on the Abyss and on the Material Plane, though they prefer urban regions where they can blend into crowds to more easily work their corruption on religious society.

Lilitus who serve the seven demon lords of sin are unique in appearance, reflecting their sins more physically than others of their kind. A lilitu of the demon lord of fungi might appear to be made of slime, for example. The lilitu are masters of mocking the divine, they infiltrate temples, corrupt priests, and slowly convert their victims to the worship of the demon lords.

A lilitu spends much of her time in an assumed form, usually that of a specific attractive humanoid who plays an increasingly important role in the local religious scene. Once she has corrupted a particular temple and its faithful to the worship of a demon lord, they leave the temple in the able hands of a dominated minion and moves on to their next target. Overtime a lilitu creates a vast network of interconnected cults, outwardly worshiping different deities but in actuality paying homage to one of the rulers of the Abyss. Eventually her minions succumb to her influence so completely that when they learn the truth about their faith, they accept it gladly.

A lilitu is normally born from the ashes of a slain succubus, though they can also be formed from the soul of a mortal who lured others of its kind to commit sins. The ritual of transformation and ascension to lilitu form is different for each succubus but always involves a decadent and shocking ritual that culminates in the sacrifice of an entire congregation of faithful worshipers who believe they are worshiping a benign deity. The succubus must be able to cast divine spells and must lead the ritual, usually disguised to resemble a harvest ritual, to its climax. This being the burning of the church and its faithful in a fire set from a portal opened to one of the deepest furnaces of the Abyss via a gate opened by the succubus. The succubus’s body is consumed in a blast of supernaturally hot fire, then she is reborn from the ashes as a lilitu.

Lilitus regard other lilitus as competition even if they are working for the same demon lord. A lilitu that learns of another’s proximity turns all her resources to that interloper’s destruction. Lilitus treat succubi with similar disdain, since any succubus can become a lilitu, given time. Most focus on removing the threat to them in any means possible, some lilitus have even been known to hire adventurers to hunt down and destroy succubi. Lilitus who have proven their worth on the Material Plane often serve demon lords as favored diplomats, messengers, spies, and assassins.

As long as the character possesses the gift, the liltu’s name (written in Abyssal) appears as a tattoo somewhere on the character’s body. Most lilitu take pains to place this mark somewhere that’s easily hidden. The recipient of a lilitu’s gift cannot see his own tattoo. As long as the gift remains active, the lilitu can monitor the character’s condition and location as if she had placed a status spell on that character. She can communicate telepathically with the character at all times, despite any intervening distance (even across planes), and by concentrating can observe the world around the character as if she were there in his place. Lilitus often use this ability to influence and trick a character into performing chaotic or evil acts. Accepting a lilt’s gift is a chaotic act and could have repercussions on the recipient’s alignment.

A creature can resist gaining a lilitu’s gift by making a DC 27 Will save. The save DC is Charisma-based.

Characters with ranks in Knowledge (the planes) can learn more about lilitus. When a character makes a successful skill check, the following lore is revealed, including the information from lower DCs: 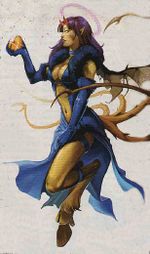 One of the Radiant Sisters as depicted in Dragon #353

All lilitu clerics worship one of the demon lords, most worshipping either Graz'zt or Malcanthet. Lilitus are excellent bards and sorcerers and those that reach a level that grants access to 2nd-level arcane spells often start taking levels in mystic theurge.

A special group of Advanced Lilitu Bards are the Radiant Sisters who serve the Queen of Succubi Malcanthet. They are a group of thirteen devoted minions who hold a favored status with Malcanthet and their devotion is total and unwavering. The term Radiant Sister is a title which is passed from one Lilitu to another upon their passing which means there are always the same number of Radiant Sisters. Though the individuals change over time, their names by which they are known never do.