Kris Holden-Ried (born Kristen Holden-Ried, August 1, 1973) is a Canadian film and television actor. In 2007, he portrayed William Compton in the first seven episodes of the Showtime series The Tudors. In 2010, he landed one of the main starring roles in the television series Lost Girl. His character, Dyson, is a Fae wolf-shifter, employed in the human world as a police officer. He also played the role of Quint Lane, the mutated lycan, in the film Underworld: Awakening.

He studied at Montreal's Concordia University School of Business. At his first audition, he landed the leading role in 12th century drama Young Ivanhoe. Holden-Ried was a champion competitor in equestrian and fencing sports. He is a former member of the Canadian National Pentathlon Team and has a silver medal from both the Pan American and Pan Pacific Pentathlon Championships. He trained with Uta Hagen's Master Class Scene Study, with Janine Manatis as well as at the Green Room Actor's Workshop and the National Film Acting School.[1] 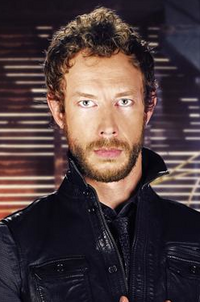 He plays the role of Dyson on Lost Girl. Dyson is a homicide detective in the human world, but is in fact a Fae called a wolf-shifter. He appears to be middle-aged but is at least several centuries in age. His history that has been revealed tells that Dyson spent centuries in Ireland serving a wolf-shifter king with his childhood friend, Stefan. After Stefan was betrayed by that king, Dyson became a lone wolf, left Ireland, and eventually came in contact with Trick.

At the time of the Lost Girl series, Dyson was operating both for the Ash and for Trick, as well as his human world role. He became intimate with Bo and over time gave himself to her, mating with her for life. He gave up that love to help Bo defeat her mother in the Season One finale. Over the course of the second season, he became more isolated and his relationship with Bo was torn apart. Through this, Ciara, the wife of Stefan, appeared and he began a relationship with her. Ciara was killed by The Garuda near the end of Season Two, which shattered Dyson further still. Eventually, with the help of Kenzi, he recovered his love for Bo from The Norn that took it from him. At the Second Season finale, he stood with Bo and his friends to defeat The Garuda and was on the path to recover his relationship with Bo.