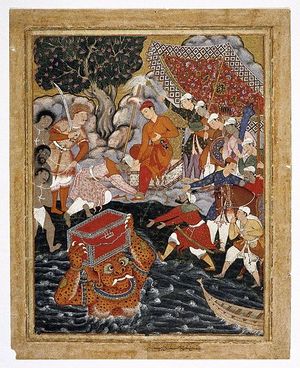 An Ifrit named Arghan Div brings the chest of armor to Hamza.

The Ifrits are in a class of infernal Jinn noted for their strength and cunning. An ifrit is an enormous winged creature of fire, either male or female, who lives underground and frequents ruins. Ifrits live in a society structured along ancient Arab tribal lines, complete with kings, tribes, and clans. They generally marry one another, but they can also marry humans.

While ordinary weapons and forces have no power over them, they are susceptible to magic, which humans can use to kill them or to capture and enslave them. As with the jinn, an ifrit may be either a believer or an unbeliever, good or evil, but he is most often depicted as a wicked and ruthless being.

Traditionally, Arab philologists derive it from عفر afara "to rub with dust". Western philologists, such as Johann Jakob Hess and Karl Vollers, attribute the word to Middle Persian afritan which corresponds to Modern Persian آفريدن ("to create").[1] 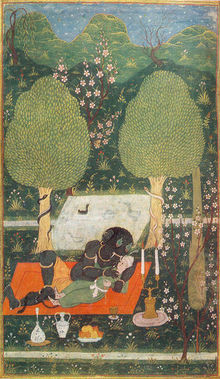 An ifrit (strong one) from the jinn said: "I will bring it to you before you rise from your place. And verily, I am indeed strong, and trustworthy for such work." One with whom was knowledge of the Scripture said: "I will bring it to you within the twinkling of an eye!" Then when Solomon saw it placed before him, he said: "This is by the Grace of my Lord - to test me whether I am grateful or ungrateful! And whoever is grateful, truly, his gratitude is for (the good of) his ownself; and whoever is ungrateful, (he is ungrateful only for the loss of his ownself). Certainly my Lord is Rich (Free of all needs), Bountiful.

In One Thousand and One Nights, in a tale called "The Porter and the Young Girls", there is a narrative about a prince who is attacked by pirates and takes refuge with a woodcutter. The prince finds an underground chamber in the forest leading to a beautiful woman who has been kidnapped by an ifrit. The prince sleeps with the woman and both are attacked by the jealous ifrit, who changes the prince into an ape. Later a princess restores the prince and fights a pitched battle with the ifrit, who changes shape into various animals, fruit, and fire until being reduced to cinders. In the book the word is used interchangeably with genie and in the tale the spirit is malevolent but easily tricked by the protagonist.[2]

In early folklore, the ifrit is said to be formed from the blood of a murder victim. Driving an unused nail into the blood was supposed to stop their formation. The creatures were reported as being able to take the form of Satan, the murder victim, or even a sandstorm.[4] 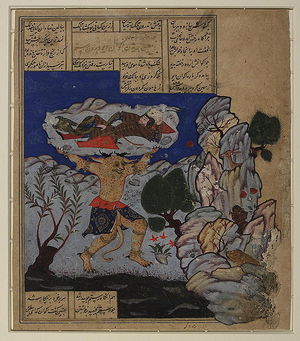 In Emily Brontë's preface to the 1850 edition of Wuthering Heights, she suggests that Heathcliff was a "child neither of Lascar nor gipsy, but a man's shape animated by demon life – a Ghoul – and Afreet."

Stories of ifrits were highly prevalent in Egyptian culture up until the Second World War. British soldiers visiting the pyramids reported that they had been warned by the locals of ifrits living in the desert in the form of a dog which would lead them astray until they became lost. At this time Ifrits were also said to have the power to turn humans into animals themselves.[5] 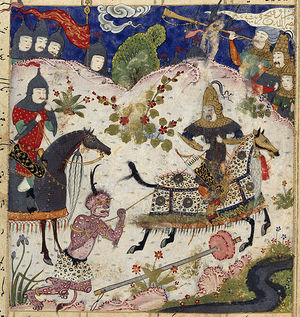 Iskandar lassoes a Russian demon, from the Hamsa of Nizami. (Persian, c. 1505)

In the Dungeons and Dragons series of tabletop role playing games, the Efreet (singular Efreeti) are powerful extradimensional beings originally from the Elemental Plane of Fire (later changed to The Elemental Chaos).