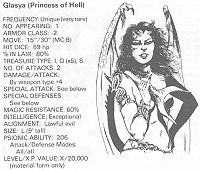 Glasya, is a is a Princess of Hell in the Dungeons and Dragons role playing game. She also appears as a Baator in the 2nd edition version of the game. She is noted to be one of the most powerful and influential of the female devils. Her symbol is a copper scourge. While she is defined as a female devil generally, some of her actions and background make it possible to also play her as a Succubus Princess as well.

Like many of the archfiends in the game, Glasya, at least namewise, has her origins in real world myths. Her name seems to be a derivation of Glasya-Labolas, which is another name for the fiend known as Caarcrinolaas. The fact that she is the Overlord of Hell's daughter is a complete original concept written by Gary Gygax.

Glasya is described as being incredibly beautiful. She has copper-colored skin and dark red or black hair. She appears human except that she has bat-like wings, horns, and a forked tail.

Glasya is the daughter of the Overlord of the Hells, Asmodeus, and his deceased queen, Bensozia. She is also the former consort of Mammon, Lord of the Third.

Glasya has become fast friends with Fierna, the daughter of Belial, and Glasya's influence has caused Fierna to grow increasingly independent from her father.

Glasya favors paeliryons and erinyes as her servants but has still to build a real court.

The only unique devils known to serve her are Tartach, Baalzebul's former legate who left the court of his master due to his opinions on the Slug Lord's policies, and Beleth, the Prince of Imps.

Glasya rules Malbolge, the sixth layer of Hell. Her fortress there, Ossiea, was created from the grotesquely enlarged and distorted skull of the Hag Countess. It is a white, domelike structure, five stories in height, whose eye sockets have been filled with windows made from blood-red glass. A windpipe-like tunnel leads downwards to the subterranean kitchens and servant's quarters' the pink flesh of the walls still expands and contracts as if inhaling and exhaling in great slow breaths.

Glasya's worshipers cluster in areas of political unrest, where a small push might turn the entire realm to the ethos of lawful evil. She is also interested in realms that uphold traditional gender roles, teaching the wives and daughters of powerful men how to become the powers behind their thrones. Her clerics' favored weapon is the scourge.

Glasya favors brothels and bordellos as fronts for her temples.

Glasya was the chief consort of Mammon (out of his harem of nine), an archdevil of avarice who rules the third layer of Hell known as Minauros. The other consorts would never try anything against her, due to her status as Asmodeus's daughter.

In first edition supplements, Glasya was very influential but not very powerful in combat and thus preferred to stay on the sidelines when it came to battle. However, she was no easy mark. She has never been in good terms with her father and would often disrespect him at any occasion. On the other hand, she liked her mother very much and would always root for her.

After the Reckoning of Hell thousands of years ago, Asmodeus ended the relationship between Mammon and his daughter by ordering her to come back to Nessus. There, she served her father as mistress of the erinyes, a position she hated.

Around 120 years ago, a human wizard named Talakara devoted herself to Glasya, and Glasya rewarded her with the circlet containing the soul of the ancient skeleton warrior Agrovale. With the combination of her increasingly powerful magic and Agrovale's might, Talakara soon conquered an isolated mountain kingdom called Pandar.

Lord of the Sixth

As of Fiendish Codex II, Glasya is now the Lord of the Sixth Layer of Hell, having taken that position from Malagarde the Hag Countess. Powered up by the life essence of late arch-Duke Geryon, the Princess of Hell is now much more set for war purposes and even more forceful. She also settled her differences with her father, at least for the moment.

She currently seeks revenge upon Levistus, the ruler of neighboring Stygia, for having dared to murder her beloved mother. To that end, she's constantly spying on him so that she can get evidence of major transgression of Baator's rules. If she can provide that, Asmodeus will grant her the right (and his benediction) to utterly destroy Levistus.

Like many of the archfiends in the game, Glasya, at least namewise, has her origins in real world myths. Her name seems to be a derivation of Glasya-Labolas, which is another name for the fiend known as Caarcrinolaas. The fact that she is the Overlord of Hell's daughter is a complete original concept written by Gary Gygax.

Glasya made her first appearance in Dragon #75, in an article that served as a preview of the then upcoming first edition Monster Manual II.

In the second edition of the game, Glasya appeared in the supplement Guide to Hell, written by Chris Pramas. In this sourcebook, she is no longer the consort to Mammon but the leader of the erinyes devils.

Glasya made her 3rd edition Dungeons & Dragons debut in the sourcebook Book of Vile Darkness.

The 4th edition Monster Manual mentions that Glasya is still the lord of Malbolge.