Faetal Attraction was the fourth episode of the Canadian television series Lost Girl. It was first shown on the Showcase Television Channel in Canada on October 3rd, 2010 at 9 PM Eastern time. 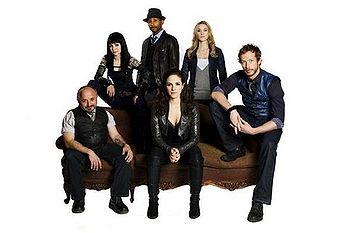 Bo and Dyson are dealing with their breakup. Bo finds herself in a sexual encounter with a Fury and her husband. The Fury tries to hire Bo to kill a human that she believes is having a relationship with her husband behind her back. Bo refuses and tries to protect that human. Relationships are strengthened between Bo and Kenzi and Bo and Dyson. Dyson faces the fact that he is in deep with Bo, and The Ash reappears to warn Bo of her actions.

The episode begins with Bo and Kenzi running away from a house as Dyson pulls up in a car. Moments later there is an explosion, which destroys it, showering the three of them with what looks like blackened human skulls. Dyson asks what happened and the answer from Bo is that some people can't handle rejection.

Then we suddenly shift to seeing Bo and Kenzi in their apartment. Bo is asleep and Kenzi is eating a popsicle. Kenzi then teases and pokes at Bo for a while. Using the popsicle several different ways, including into Bo's ear, she gets Bo to admit that she's suffering because Dyson rejected her. And it's the first time that Bo has been rejected by anyone. Kenzi finally gets Bo up and we go to the opening credits.

We return to see Dyson in his office dealing with a criminal, and not too well as he manages to dislocate that person's shoulder. It's obvious that he is distracted by something, even Hale can see that, and storms out.

Next we find Kenzie and Bo in the middle of nowhere, Bo taking out her frustrations on a wrecked car by making it more wrecked than it was. While that helps Bo's mood a little bit, they decide that the best thing is to go to the Fae bar and get good and drunk there together. They go there, find Trick and he starts to worry about a drunk Succubus being at the bar.

We jump back to Dyson again, he gets a tongue lashing from his boss about the injury to his prisoner, after that, Hale gets Dyson to admit that he is overwhelmed by having to work for the police, for the Far and keep an eye on Bo as well. The pair head out for a drink.

Back at the Far bar, Bo is getting slightly drunk, Kenzi a bit more than that, when the human doctor Lauren appears. She tells Bo that she wouldn't want to be on the receiving end of a drunken Succubus booty call. She leaves, tells Kenzi to watch Bo, and Kenzi comes to the opinion that the doctor has a thing for Bo.

Moments later, a man walks up and asks Bo to join him and his wife for a drink. We never find out exactly what kind of Fae Samir is, however, his wife, Olivia we quickly learn is a Fury. Initially she refused, but after Dyson appears, Bo joins the couple and a short time later the three of them, Kenzi in tow, leave the bar.

The following morning, Bo's bedroom is a mess, she has breakfast with Kenzi, but then has a visit form Olivia. Olivia admits that Bo took so much out of her that she couldn't walk to her car well and then comes to the reason why she is there. She wants to hire Bo to kill a human named Jenny. Bo refuses the job, Olivia leaves saying she will do it herself, and in the wake of that, Bo and Kenzi decide that they have to protect Jenny.

We switch to Jenny at home and she is attacked by Olivia, Bo manages to defeat her at least temporarily. The pair of them run out leaving Olivia behind.

Back to Dyson, we find him at his office. Hale confronts him about not seeing the police psychiatrist, noting that not seeing them just confirms that he is off somehow.

Meanwhile, Bo and Kenzi get some information out of Jenny, and the Bo leaves to talk to Samir. At the same time, Dyson is finally in the psychiatrist's office and gets into a sparring match with her. She tries to get behind his walls and he pokes holes in her world as well.

Bo arrives at the home of Olivia and Samir to find Olivia going insane, attacking Bo and running out of the house. Bo then discovers Samir in the living room with his head cut off. She then returns to Kenzi and Jenny, telling them that Samir is dead. In order to calm Jenny, she uses her Succubus powers for a short time, trying to help her. She does calm down and seems to be better. Dyson and Hale arrive at the murder scene, Dyson realizes that Bo was there, and they begin to piece together what happened.

The detectives mention the fact that Furies have Sisters and go there in hopes of finding Olivia. They do find her there and Hale, for the first time, is confirmed to be a Siren. He uses his powers to control Olivia, get her out of the house and into their police car, leaving Olivia's sisters behind.

At the apartment, Bo finds that Jenny seems to be infatuated with her, freaking Bo out slightly. A call from Dyson summons Bo to Lauren's office to find Olivia strapped to a table, thrashing out wildly. By the time this scene ends, The Ash has warned Bo that she is being watched, Dyson grills her for information, and, in the end, Olivia dies out of grief from losing her husband, but, before she dies, she claims that she did not kill him.

Kenzi remains in the apartment with Jenny, trying to learn something more from her and becoming more certain that Jenny is hiding something. Eventually, she gains access to a bag that Jenny took from her home, opens it, and finds severed heads in it. Before she can do anything, Jenny knocks her out and is shown to be totally mad.

Bo returns to the apartment, finds Kenzi and Jenny gone, a note from Jenny and the severed head of Samir in her room while taking to Dyson on her phone. The pair of them put the pieces together finally that Jenny is the killer. Bo rushes off to try and save Kenzi from a similar fate.

Kenzi awakes to Jenny ranting and acting very crazy. Jenny explained that everyone she has loved eventually leaves her. And then she opens a cabinet to reveal a series of skulls within it. The victims that she has killed over the years. Bo arrives and tries to control Jenny by making her believe that she is in love with her, but to Bo's shock, Jenny reveals that she has made explosives and is going to use it to make the two of them be together forever.

Then, before Bo can stop that, Olivia's sisters arrive and attack both Bo and Jenny. The fight continues for some time, eventually Kenzi gets loose and helps Bo to defeat the two sisters. Jenny, injured in the fighting, crawls towards the detonator as Bo and Kenzi attempt to escape.

We then return to the scene at the beginning of the episode, explosions, skulls flying through the air and all.

The episode then concludes with Bo and Kenzie back at the Fae bar, talking about their relationship. Dyson arrives to tell Bo that he covered for her with the Fae and that the Jenny case scored him points with the police. Trick confronts Kenzi about a missing 300 year bottle of mead, which gets her in trouble with him.

Bo and Dyson talk about their relationship, which they come to define as being "friends with benefits." Their talk ends with Bo asking Dyson if he wants to get friendly at her place or his.

The episode ends with Dyson back in the psychiatrist's office and he admitting that there is this woman in his life...

Answers to Questions Raised in this Episode

Hi Anne, we thought Samir was some kind of bacchanalian Fae. A natural profession for an event planner. [2]

You can find out more about the referred to Fae at Wikipedia here.

Tera, the owner of this website, posted a review of this episode on her Blog, A Succubi's Tale on Friday, October 7th, 2010. You can find that review here. She gave it 4.1 pitchforks out of 5.