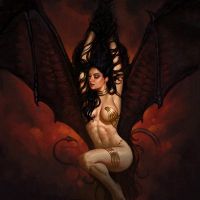 A Demoness is a female Demon. In religion, folklore, and mythology a demoness is a supernatural being that is generally described as a malevolent spirit, and in Christian terms it is generally understood as a fallen angel, formerly of God. A demoness is frequently depicted as a force that may be conjured and insecurely controlled.

The "good" demoness in recent use is largely a literary device, though references to good demons can be found in Hesiod and Shakespeare. Most appear as dark haired beautiful woman with horns and a tail of various colours, but generally with red skin.