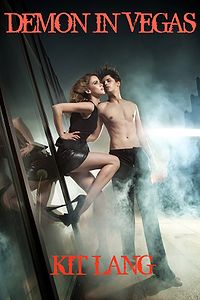 Demon In Vegas is an eBook written by Kit Lang. In this work the character Charity is a Succubus.

Charity is the sexiest exotic dancer in Las Vegas. She's also a supernatural being who devours souls. After centuries in the shadows, she's recruited to work for the forces of good by a handsome secret service agent and his vampire companion. An artefact of rare power is about to go up for auction, and all the cults in Vegas want a piece of it.

Charity is the hottest, dirtiest action babe ever to cast a spell or drop her thong in the name of law and order. Come and enjoy her first adventure into deadly sin.

The following review was originally published by Tera on her Blog, A Succubi's Tale on October 28, 2011

It’s a rare story that I find about Succubi where I read the story and think… Darn she seems ffamiliar… Now by that I mean that it seems, in a lot of ways, that the Succubus of the story is, at least partly, acting or seems to have some of my Succubi-self’s personality. When I discover a work like that, I can’t help but adore it. But in this case, that comes not with the character of Charity, but the story, the world they are in, and most of all, the questions about Charity that we are left with at the end of the story…

I like strong characters. Charity is definitely that by far. Oh she seems not to be too interesting when we first meet her, but there is a moment that is more telling, at least to me, than just about any other story with a Succubus in it that I have read in sometime. It’s right at the beginning of the story and it’s in the previews so I am not spoiling the story much, but she claims the soul of an old woman that has been with her for a very long time, and when it is over, the pain she shows in doing so was heart breaking.

It wasn’t just what happened, but in the description of it, you got the sense that Charity was something more than she seemed to be. As the story progresses, that becomes more and more clear. She begins to find herself again, her true self that she has kept under wraps for ages now. We never learn exactly who is she, there are a hint or two in the story and I have my thoughts about who she is that I will not share here. But if I am right, I think that it is possibly the most interesting transformation that I have read…

One more thing about Charity, I thought that the explanation of what happens to the souls she has claimed is a fascinating idea. I really wish that I had thought of it, it makes sense and it allows for so much of who Charity is to come to the fore. I found myself crying a bit when we see the woman that Charity claimed at the beginning of the story appear… That was just so well done and I give the author lots of credit for giving that to us… Yes, I know that I am being vague, but I don’t want to spoil what is, really, a terrific plot device and resolution to that problem that Succubi have.

The story is quite surprising really in how it takes what we would expect of our world and mixes in quite a lot of supernatural beings and powers. Oh there are a couple of moments where the action is so far over the top it becomes a little too much, the BDSM party is one, though Charity “at work” during it was riveting, the attack that happens at the same time was confusing for me. I also had a small problem when the big reveal occurred just before the climax of the story. I understood why the author went the route they did, but looking over the book afterwards the hint that they claimed was the clue that Charity needed was much too vague and it was overwhelmed by a lot of other things that happened in the middle of the book.

Regardless of that little nit, the writing is solid, I didn’t stop reading this until the end, and then I took a few more reads through it to catch a lot of the subtle things that the author added to the story. She writes really well and I enjoyed every moment of Charity and her, if not friends, then partners, that we saw.

I really hope that another book is coming soon, there are a lot of questions I want answered about Charity and her world. I’ll definitely be purchasing the next story and every other one that comes from this author… Highly recommended for lovers of Succubi…

I’m giving this work five pitchforks out of five.

So very, very good, just wish that I knew if there was more to come…