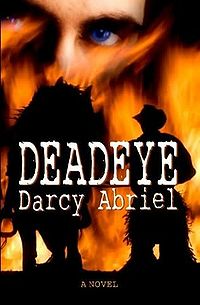 Deadeye is a novel written by Darcy Abriel. In this work the character Justus is an Incubus and the character Caecilia is said to have Succubus-like abilities.

It's centuries before these two lovers meet again. Now in the 1880's old west, Caecilia, an experienced immortal courtesan, has been sent to the Infernia dominion, and specifically to a town called Deadeye, to retrieve the son of the Nacraecian Dreamweaver Sorceress, who was fathered by the dark lord, Zevodious. Justus has been with his demon father since his birth. He is an incubus that must have the demon energy purged from him, and Aphrodite sends Caecilia to see the dark energy exorcised so that Justus may embrace his dreamweaver destiny. A task to be accomplished only through the act of lusty fornication. But Zevodious has one demand that must be met before he will release Justus.

Return to him Vitus, the Roman soldier who was once his slave, who escaped the deviant lusts of the dark lord with acute cunning. Possessing demon powers now, Vitus has been ordered by Apollo to return to Zevodious. In Deadeye, Vitus and Caecilia are reunited. Once again Vitus is challenged by the darkness that's become a part of his soul, while Caecilia is tempted by another. Will Vitus escape Zevodious again? Or in the end will Caecilia, the woman he's loved through eternity, end up sacrificed as well? Vitus would do anything to protect Caecilia, but will his submission to Zevodious actually save her?

And then there's Justus, with the demeanor of an angel and the soul of a demon, whose destiny lies in another direction. He must claim Caecilia for himself in order to purge the darkness that claims his own soul. Vitus, Caecilia, and Justus. Intertwined fates. Lust and sacrifice, passion and purpose, a demon's demand, a demon's desire--will they escape or be forever enslaved? Will love triumph? Or will it be a demon's powerful dark and all-consuming lust that claims them all?

At the time of this article's addition to the SuccuWiki, there was no review available.