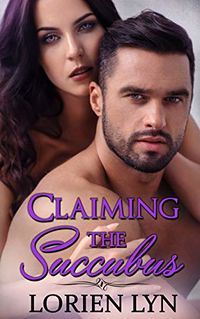 Claiming the Succubus is an eBook written by Lorien Lyn. It is the first work in the Takers series by this author. In this work the character Ava Hawley is a half-Succubus.

Being a Succubus has its perks…until the hunter becomes the hunted.

For half-breed succubus Ava Hawley, hunting supernatural foes is worth all the risks and rewards. But when a wolf shifter is responsible for kidnapping her sister, the mission becomes personal. Ava is ordered to track down the bad boy and turn him over to her boss. That is, until she meets the dangerously sexy shifter and realizes her charm—the kiss of death—is no match for the charms of her opponent.

Alpha werewolf Killian Reid is on the run from a demon mistress, but someone else is on his tail—a stunning seductress with more sex appeal than any woman ought to have. And Killian can't resist her. Proving his innocence will be a challenge, but with every moment that he spends with her, Ava’s self-control weakens. And as their attraction grows, she knows she'll have to rely on the shifter she'd been sent to capture, or they'll both become victims to another predator…