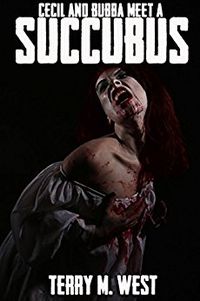 Cecil & Bubba Meet a Succubus is an eBook written by Terry M. West. In this work the two main characters are haunted by a Succubus.

Say hello to Cecil McGee and Turner "Bubba" Teague. These two Southern slackers go and get themselves cursed by a drunk gypsy, and then they hire onto a paranormal investigation to make the rent. Soon they are haunted by a seductive demon and all hell breaks loose.

The following review was originally published on Tera's Blog, A Succubi's Tale on December 12, 2014

I really do not like stereotypical characters. I just cannot bring myself to care all that much about them for one thing. The other is that when they are so far into being stereotypes that I cringe at their words in a story… That’s not a good thing.

I do understand that can be done for the sake of humour or setting up the characters themselves. It gives them voice and that is, generally, a good thing. But then sometimes being isn’t really as important as having in a lot of ways. Sometimes you just can’t see the humour for the trees I suppose…

Cecil and Bubba have a very peculiar life which eventually leads to them being cursed, getting involved with a haunting, and then facing a Succubus. As this all happens we learn some of the facts of life according to the pair and their outlook on the world around them.

The first thing I have to say is that I didn’t quite realize on my first read through this work that it was meant to be a comedy/horror piece. I think my lack of seeing that tainted my overall opinion of it. I couldn’t find my way to caring about Bubba or Cecil honestly, or for that matter any of the characters that appear in the work.

Reading it a second time with that in mind didn’t do much to help me like it any more than I did in the first place. It’s hard for me to like stereotypical characters, I’ve said that a lot in the past, and in this case the main characters were… just hard to like. The work reads like a screenplay and I think as a film it would work a lot better for me than it did in the written word.

As for the Succubus… She was only slightly interesting to me. There is something she does which is not at all Succubus-like, but then in this case I think she was there for the sake of some very weird scenes having to do with cleaning windows… You’ll have to read the book to see what I mean about that. She started out to be interesting, but then went over the edge towards stereotypically monster behaviour and that just didn’t work for me.

As a whole I found it a hard read and that, more than anything else, made my enjoyment of this work suffer. That isn’t the fault of the author in how they write, which is very good. It’s simply a matter of my not enjoying the story as much as I thought I would.

I’m giving this work one and a half out of five pitchforks.

I didn’t see the humour in the work myself. It seems a lot of other people do based on the ratings on Amazon that I can see… But I can’t. I didn’t like the story, didn’t care for what happened in it and as for the Succubus? Really didn’t do a thing for me.

I suppose in this case it is all a matter of taste… It wasn’t mine at least. Maybe it will be yours?