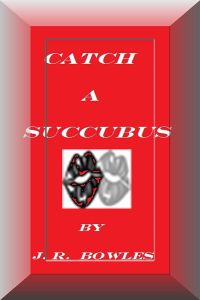 Catch a Succubus is an eBook written by J.R. Bowles. In this work, a being appears with similar powers and appearance to a Succubus.

Daniel has just turned seventeen but he still hasn't hit puberty. He is only five feet tall, no body hair and pudgy. He and his buddy, Jimmy, have one last game on the Ouija Board before he moves away to an odd country house owned by a new stepfather.

Daniel's mother Kelli, has married Duncan Osborne, a high school football coach who has taken an interest in his overly indulged new stepson.

One night Daniel awakens to someone in his room and is propelled into a fast paced sexual paranormal escapade, accelerating him into puberty.

His friend Jimmy comes to spend a few days with him and they soon get caught up in the most confusing adventure either one of them could have imagined.

The following review was originally published by Tera on her Blog, A Succubi's Tale on April 18, 2014

Succubi are, in many stories about them, beings of both sexuality, but also horror. The thing about that is, if one overpowers the other, the story can suffer for that.

Still more worrisome is if another character, or characters, become what you remember about a story when the end comes… that can make the best of Succubi, or the worst of them, meaningless…

Nothing should ever be that. Regardless of the meaning or reason behind that purpose. But that happens in real life, it happens in stories and when it does… It does cause more than pain.

Overall, I found this a difficult story to read for several reasons, but the main one was Daniel’s stepfather. I don’t like the type of character he is, which is a crass, mean, and truly ugly person. While that is important to the overall story to a point, the difficulty for me is that he takes over most of the book and overpowers the rest of the characters.

That’s a huge problem as Daniel, his mother, and most of all the Succubi that appear just haven’t the same strength of character in them in comparison with him. I found myself remembering things he did through the story and the rest wasn’t as memorable. There wasn’t a lot of character development to see in the story either, which again is a problem for me personally.

Setting that aside, the appearance of the Succubi in this story is very much towards the horror aspects of what they appear to be which does, as it becomes more pronounced in the story, become somewhat stereotypical really. I didn’t care for her much, and while through her just about every major sexual possibility is touched on, it seemed to be more for titillation than to actually make a point in the story.

There is a good deal of violence and uncomfortable situations in this work and they are paired with moments of sex that, occasionally, are more than you would expect from a story like this.

One other thing makes me a bit squeamish about this work and that is the main character, as it is clearly stated in the summary, is seventeen years old. That makes this work even less a story that I enjoyed and I wonder why having Daniel be seventeen and not eighteen was so important to the story as a whole.

In the context of the story his age isn’t important, but as a matter of being able to actually read the story and not have that thought in the back of the reader’s mind? I think that some accommodation would have been nice.

One last point. The ending of the story was abrupt and it didn’t really fit well with the story. I also found that where it ended just made the accomplishment of finishing the work be less so. I found that whatever promise the story had at that point was completely ruined and that, that really hurt my opinion of it.

I’m giving this work two out of five pitchforks.

Well written, lots of atmosphere and story, but that’s not nearly enough. The problem is that the stepfather gets in the way of the story and that’s where things come apart. I think the author could have just as well gotten rid of him and the story would have been almost exactly the same.