In the Lost Girl universe, Succubi have few natural enemies. The primary one is a being called an Albaster who can be described as being the emotional opposite of Succubi. 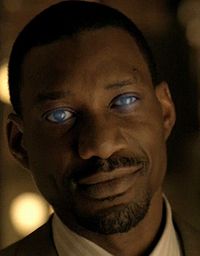 Albasters seem to be able to sense other Fae, especially Succubi, which makes sense as they are the enemies of Succubi and appear to prefer to feed on them.

They do effect Succubi by playing on their emotions, specifically any internal remorse on the Succubus' mind about her needing to feed on others, and thus making it difficult to overpower them.

They are resistant to an extent to the powers of a Succubus, however, two or more Succubi can, given time, overcome them. It is not known if a human being with sufficient will power can overcome them as well.

Albasters feed on negative sexual emotions in general. Albasters create massive shame in their targets over sexual actions that lead to depression and eventual suicide. According to what information is known they feed exclusively on women. Why that is the case has not been explained. They then absorb that emotion leading to the victim s eventual suicide.

The series has only shown one example of these creatures, that being a male, so it is not known if there are female Albasters as well. While it was noted in the episode that they appeared in that they only feed on women, this does not necessarily mean that there are no female Albasters.

It is also assumed that since Albasters feed on women that Incubi are not affected by male Albasters, but the question of female Albasters powers over Incubi is not understood.

It would seem that Albasters will seek out places where women have low opinions of themselves and then play upon those emotions. Bertram for example ran a speed dating club and used it to locate suitable victims that he could use to his advantage.

Appearances in the Series

One Albaster has appeared in the series so far. That being the character Bertram in episode 10 of the first season of the series, The Mourning After as portrayed by the actor Arnold Pinnock. He did not survive his encounter with Bo and Saskia at that time. Saskia killed him and afterwards Bo attempted to revive Bertram, but she did not have the ability at that point in the series to return energy back into others like Saskia could and failed.