What Slays in Vegas 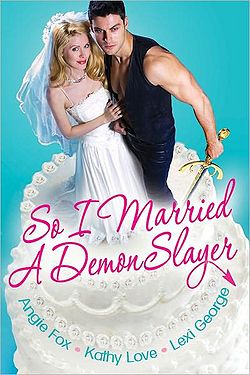 Cover of So I Married A Demon Slayer anthology collection by Kathy Love, Angie Fox and Lexi George.

So I Married A Demon Slayer is an anthology novel written by Kathy Love, Angie Fox and Lexi George in which various demons and demon slayers among other supernatural beings appear. As part of this work, the story contributed by Angie Fox, What Slays in Vegas, is part of the Lizzie Brown Series. It is the story of a Succubus living in Las Vegas during the events of the second novel of the series, The Dangerous Book for Demon Slayers, who meets a demon slayer and somehow manages to become married to them.

Other novels by Angie Fox on SuccuWiki

In the lusty humidity of the Deep South, among the neon lights of Vegas, and the glitz of high-fashion, demon slayers are the new sexy…

At Hot! Magazine, the devil really does wear Prada. When the CEO is an actual demon and the mail room guys are undercover demon slayers, it’s not beyond the realm of possibility for an up-and-coming photographer and a model possessed by much more than a sweet tooth to fall in love.

When a sexy succubus comes up against a fearless demon slayer intent on killing her boss, a truly wild Vegas night turns into a quickie wedding. But in a city where anything goes, a demon slayer wedding a succubus is strictly forbidden. Which doesn’t mean either is rushing to jump out of the marriage bed.

He’s perfection in a tuxedo—more so out of it—and on a mission to protect his Alabama gal from the mysterious mayhem intent on her destruction. But the bride is a spunky steel magnolia with special powers of her own, determined to drop-kick evil forces across the state line and give her slayer a run for his money.