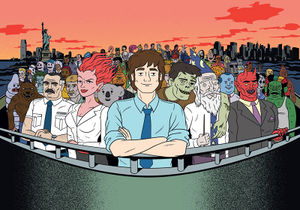 The animated cast of the Comedy Central television series Ugly Americans. The Succubus-like Character Callie Maggotbone is second from the left in the front row.

Ugly Americans is an American animated television series developed by David M. Stern and created by Devin Clark. The series will focus on Mark Lilly, social worker at the Department of Integration, in an alternate version of New York City with monsters and other creatures.[2]. Daniel Powell serves as an Executive Producer and Aaron Augenblick is the Supervising Producer and Animation Director.

Ugly Americans premiered on March 17, 2010 on Comedy Central. The series is based on an original idea by Devin Clark, which was later developed by former The Simpsons writer David M. Stern.[3] It was picked for 7 episodes in May 2009.[4] The cast includes Matt Oberg as Mark Lilly, Kurt Metzger as Mark's zombie roommate Randall Skeffington, Natasha Leggero as Callie Maggotbone, Mark's demon boss and "office fling", Randy Pearlstein as wizard Leonard Powers, Michael-Leon Wooley as Twayne, a demonic bureaucrat, and Larry Murphy as Frank Grimes, a law-enforcement officer.[2] The second season continued after a hiatus break on Wednesday, March 14, 2012.

Ugly Americans is set in a version of New York City quite unlike the one we understand.[5] From the official Comedy Central page: Take New York City, add every horrifying beast, science-fiction freak, and fantasy fairy, shake thoroughly, and you've got Ugly Americans. This animated horror-comedy series follows one Mark Lilly, social worker at the Department of Integration, as he helps new citizens both human and "other" adapt to hectic life in the Big Apple. There are easier tasks than weaning vampires off of blood, socializing land-whales, and housebreaking werewolves, but Mark is up to the challenge. Between his stressful job, a zombie roommate, and a demon on and off girlfriend, Mark's lucky if he can sneak in a few minutes of sleep. But who can sleep when there's a drop-dead gorgeous Mermaid sitting at the bar?

A social worker at New York's Department of Integration, and is a newcomer to Manhattan. He recently moved into his first apartment, a 2-bedroom he found on Craigslist, only to discover his roommate was freshly undead. Despite the frustrations of his job, where his boss Twayne has downsized Social Services to two people, Mark maintains a positive attitude. He has an on-and-off relationship with his immediate superior, an insanely hot (and completely insane) demon named Callie Maggotbone who he likes but also feels like she will one day murder him.

Mark's roommate, "went zombie" in an attempt to win over a cute girl with a short-lived zombie fixation (described by Mark that "it is never a good idea to make life decisions with a hard on and a fifth of tequila"). Now, the unemployed/undead oaf spends his days doing odd jobs to pay the rent. Randall hails from South Jersey, a rabidly anti-zombie community, so he has been forced to hide his condition from his parents (especially his father, who fought in the Human-Zombie Civil War). Due to his zombie-ism, Randall is frequently losing body parts to decay, forcing him to find replacements at local flea markets.

Mark's immediate superior, and also his on-again/off-again girlfriend. In between stealing Mark away for bathroom rendezvous, Callie is berating him for being so soft. She's the typical 20-some­thing girl who doesn't know what she wants, but is also bona fide hellspawn, as her father is a high-ranking minion of the Devil. However, since Callie is the product of that demon's union with her waifish human mother (who was drugged by a cult), Callie is frequently conflicted by her human side. She is drawn to Mark the nice guy, but feels in her heart that she will inevitably end up with someone like Twayne the Bone Raper... after all, it's what daddy wants. Unfortunately for all of us, such a union could potentially lead to the apocalypse.

She dislikes her father, seeming to be more turned on to Mark after believing her father hated him but has shown to deeply care about her mother, going to her to seek advice. Being a female demon, her body goes through a process called Painful Mortal Shedding, in which the toxins in her body cause her to shed her skin for a new one, during which she become increasingly deranged where the only thing that can numb the pain is sex. In earlier episodes she is shown to be overly possessive of Mark, and can shape shift. Unlike all pure demons, Callie has a soul, though she can remove it at will, although doing this seems to make her a full demon since when she does remove it, she changes into a large demonic beast. According to Mark's calendar, her period is three weeks long. Due to her demon side, she gets aroused by the sight of physical injury.

A centuries-old wizard whose path has somehow led him to a desk job at New York's Department of Integration. This suits Leonard just fine, as his primary goals in life are to drink heavily and not rock the boat. In fact, he hasn't done any real work in years, relying on Mark (and his union, The Wizard's Guild) to save his ass. Leonard's brother is the famous magician Christ Angel (a parody of Criss Angel), a fact that has bred a lot of resentment in Leonard, and probably contributed to his ongoing drinking problem.

A mid-level government bureaucrat who oversees New York's Department of Integration. He is also a terrifying demon, who would prefer tearing your spine out to giving you the time of day. Twayne loathes Mark's case files and would rather vaporize them than help them, but he has to play ball, because infiltrating the U.S. government appears to be part of some larger demonic plan. Nonetheless, he despises Social Services and their compassionate ways, so he has slashed the department down to two people and allocated all of their funds to law enforcement. Despite his imposing appearance, Twayne is a bit of a high-status buffoon, often relying on Callie to make sure the department runs properly. Mark has referred to him as a "total douche nozzle".

The head of Department of Integration's Law Enforcement Division, and like Twayne, has utter disdain for non-humans. Preferring to think of them all as "illegal", he hunts down those who have strayed from the proper bureaucratic procedures that provide a path to U.S. Citizenship -- at which point Mark must step in to help. Grimes' encounters with unruly creatures have left him with a lifetime's worth of scars, both visible (missing kneecap) and emotional (broken marriage). Thus, he naturally detests Mark and anyone else who sympathizes with the immigrants. Grimes commands a small but well-funded goon squad that operates out of the D.O.I.'s "force floor."

The first episode premiered on March 17, 2010,[10] following the 14th season premiere of South Park, "Sexual Healing". It was watched by over 2 million viewers.[11] On April 21, 2010 Comedy Central announced that they had ordered 7 additional episodes of Ugly Americans, to begin airing in October 2010.[12] On December 15th, Comedy Central announced that they picked up the show for a second 14-episode season, which was later expanded to 17 episodes.[13] The first 10 episodes of the second season aired in the summer of 2011 following Futurama and the remaining 7 episodes aired from March 14, 2012 following South Park.