Too Hot for Hell

Too Hot for Hell is a 2003 compilation DVD set of four mid-90s horror films. One of these films, Evil Sister, had a Succubus as one of the main characters. 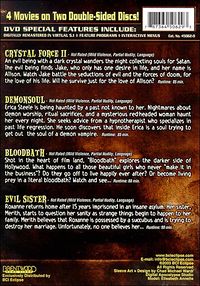 The following cast are listed in the film Evil Sister:

The DVD set contains the following films, with only the final film, Evil Sister, having a Succubus as one of the characters:

An evil being with a dark crystal wanders the night collecting souls for Satan. The evil being finds Jake, who only has one desire in life, and her name is Allison. Watch Jake battle the seductions of evil and the forces of doom, for the love of his life. Will he survive just for the love of Allison?

Erica Steele is being haunted by a past not known to her. Nightmares about demon worship, ritual sacrifices, and a mysterious redheaded woman haunt her every night. She seeks advice from a hypnotherapist who specializes in past life regression. He soon discovers that Erica is a soul trying to get out the soul of a demon vampire.

Shot in the heart of film land, Bloodbath explores the darker side of Hollywood. What happens to all those beautiful girls who "never make it in the business?" Do they go off to live happily ever after? Or become living prey in a literal bloodbath? Watch and see...

Roxanne returns home after 15 years imprisoned in an insane asylum. Her sister, Merith, starts to question her sanity as strange things begin to happen to her family. Merith believes that Roxanne is possessed by a succubus and is trying to destroy her marriage. Unfortunately, no one believes her...

Review taken from the IMDb.

This movie tries to be a run of the mill slasher movie, and would be well on the way to mediocrity if only the quality of the picture was better. Filmed in an unknown American trailer park, this movie made great use of a walk in pantry, some wal-mart lawn chairs, and Hank Jr's flag collection. There was plenty of gore and gratuitous nudity as you come to expect in this type of slasher movies, but it came off as trashy and amusing, instead of seductive and intense as I hope was the original intent. They also had to throw in some emergency scenes such as the sacrificial killing to get some additional nudity to keep the attention of the few still watching, and the wicca nurse to explain what is going on - because there is absolutely no way you would get that information from the earlier plot.

There are some unexpected plot twists that does keep this from being horrible, despite the poor quality of the filming, acting, editing, and just about everything else, so there are a few worse things to do with 90 minutes of your life, such as trying to type a review of this stinker at 3 in the morning without using profanities. Ah well such is life.