The Devil in Ms. Jones 6

The Devil in Ms. Jones 6 was a 1999 straight to video adult movie staring Stacy Valentine and directed by Anthony R. Lovett. The film featured two succubi as its main antagonists who were played by Nikita and Vicca. 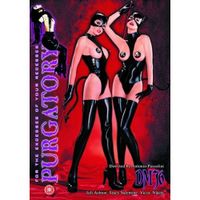 The Devil in Ms. Jones 6 DVD Box Back Cover

It all starts when Justine Jones accidentally summons two sexual demons to earth. As the two succubi embark on a sexual rampage, Justine is recruited by Satanito hunt down the pair of errant she-devils and send them back to Hell. The trail is littered with a slew of sexual psychos -- a trailer park nymphomaniac, a perverted beekeeper, a movie star and his latex nurse, and even a masked Mexican wrestling team who take on Justine and Satan in a no-holes-barred grudge match. So prepare yourself for a mind-bending descent into a wicked parody of porno cliches, packed with nine internal sex scenes that will leave you for lack of better word, hot.