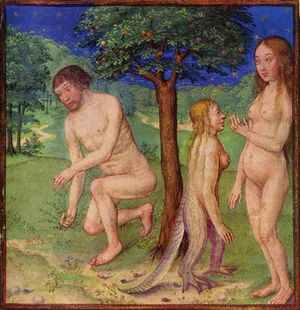 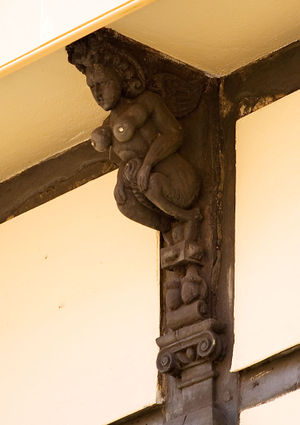 In folklore traced back to medieval legend, a succubus (plural succubi) is a female demon who takes the form of a human woman in order to seduce men, usually through sexual intercourse.[1] In modern times, a succubus may or may not appear in dreams and is often depicted as a highly attractive seductress or enchantress, while in the past succubi were generally depicted as frightening and demonic.[2] The male counterpart is the incubus. Religious traditions hold that repeated intercourse with an incubus or succubus may result in the deterioration of health, or even death.

Similar to a vampire, succubi also known as Lilith and the Lilin (Jewish) and Belili (Sumerian) draw energy from men to sustain themselves, often until the point of exhaustion or death of the victim. From mythology and fantasy, Lilith and the Lilin (Jewish) and Lilitu (Sumerian) are, in redactive Christian fables (folktales not part of official Christian theology), considered succubi.

According to the Malleus Maleficarum, or "Witches' Hammer", published against the recommendation of the Catholic Church in 1487 and officially banned in 1490, succubi would collect semen from the men they slept with, which incubi would then use to impregnate women thus explaining how demons could apparently sire children in spite of the traditional belief that demons were incapable of reproduction through generative or gestative means. Children so begotten were supposed to be more susceptible to the influence of demons.

The word "succubus" comes from an alteration of the Late Latin succuba meaning "strumpet". The word itself is derived from the Latin prefix "sub-" which means "below, underneath", and the verb "cubo" which means "I lie". So a succubus is someone who lies under another person, whereas an incubus (Latin "in-" in this case stands for "on top") is someone who lies on top of another person.

Mare was also a term for the sighing, suffocative panting, or an intercepted utterance, with a sense of pressure across the chest, which occurs during sleep. These symptoms were also thought to be an incubus (or succubus), an evil preternatural being, causing nightmares and/or nocturnal emissions. This phenomenon is now thought to be an experience of sleep paralysis.

According to Zohar and the Alphabet of Ben Sira, Lilith was Adam's first wife who later became a succubus.[3] She left Adam and refused to return to the Garden of Eden after she mated with archangel Samael.[4] In Zoharistic Kabbalah, there were four succubi who mated with archangel Samael. They were four original queens of the demons Lilith, Agrat Bat Mahlat, Naamah, and Eisheth Zenunim. In later folklore, a succubus took the form of a siren.

Throughout history, priests and rabbi including Hanina Ben Dosa and Abaye, tried to curb the power of succubi over humans.[5]

Not all succubi were malevolent. According to Walter Mapes in De Nugis Curialium (Trifles of Courtiers), Pope Sylvester II (999–1003) was involved with a succubus named Meridiana, who helped him achieve his high rank in the Catholic Church. Before his death, he confessed of his sins and died repentant.[6]

The appearance of succubi varies, but in general they are depicted as alluring women with unearthly beauty, often with demonic batlike wings, and large breasts; they also have other demonic features, such as horns and cloven feet. Occasionally they appear as an attractive woman in dreams that the victim cannot seem to get off their mind. They lure males and in some cases, the male has seemed to fall "in love" with her. Even out of the dream she will not leave his mind. She will remain there slowly draining energy from him until death by exhaustion. Other sources say the demon will steal the male's soul upon ejaculation.

According to the Kabbalah and the school of Rashba, the original three queens of the demons, Agrat Bat Mahlat, Naamah, and Eisheth Zenunim and all their cohorts give birth to children, except Lilith.[7] According to other legends, the children of Lilith are called Lilin.

According to the Malleus Maleficarum, or "Witches' Hammer", written by Heinrich Kramer (Insitoris) in 1486, a succubus collects semen from the men she seduces. The incubi or male demons then use the semen to impregnate human females,[8] thus explaining how demons could apparently sire children despite the traditional belief that they were incapable of reproduction. Children so begotten – cambions – were supposed to be those that were born deformed, or more susceptible to supernatural influences.[9] The book does not address why a human female impregnated with the semen of a human male would not produce a regular human offspring.

It is believed by some in the field of medicine that the stories relating to encounters with succubi bear similar resemblance to the contemporary phenomenon of people reporting alien abductions, which has been ascribed to the condition known as sleep paralysis. It is therefore suggested that historical accounts of people experiencing encounters with succubi may have been in fact symptoms of sleep paralysis, with the hallucination of the said creatures coming from their contemporary culture.[10]

A Middle Eastern version of the succubus known as "um al duwayce" (أٌم الدويس) portrays this succubus as a beautiful, alluringly scented woman who wanders the desert on the hooves of a camel. While other forms of the succubus participate in sexual intercourse to collect semen and become impregnated, this particular succubus is instead a judge of character and exacts revenge on those who commit adultery. She attempts to lure these men to have intercourse with her, at which time sharp razors within her vagina slice off the partner's penis, leaving him in agonizing pain. Having rendered the man helpless, she turns into her true form and proceeds to eat him alive.

In Arabic superstition, the qarînah (قرينه) is a spirit similar to the succubus, with origins possibly in ancient Egyptian religion or in the animistic beliefs of pre-Islamic Arabia.[11] A qarînah "sleeps with the person and has relations during sleep as is known by the dreams."[12] They are said to be invisible, but a person with "second sight" can see them, often in the form of a cat, dog, or other household pet.[11] "In Omdurman it is a spirit which possesses. ... Only certain people are possessed and such people cannot marry or the qarina will harm them."[13]

The Hawaiian version of this myth is known as "Autumniessink". A mythological being that appears as a "beautiful young woman" and sneaks into mens tents at night and steals their virginity. It is said that the only way to stop this demon is to wear a loin cloth made of the Hawaiian "snowbush plant".