This article is a guide to all Succubi in the Angel Falls universe. If you are looking for other definitions see: Succubus (disambiguation).

A Succubus (plural Succubi), in the Angel Falls Universe, is a female demon who takes the form of a human woman in order to seduce men, usually through sexual intercourse. The male counterpart is the incubus. In most cases repeated intercourse with a succubus may result in the deterioration of health or even death. 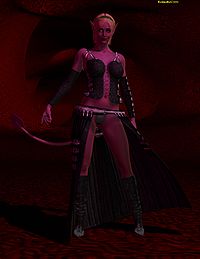 Lilith is considered the Queen of all Succubus

The original three queens of the demons, Agrat Bat Mahlat, Naamah, and Eisheth Zenunim and all their cohorts give birth to children, except Lilith. It was some 2600 years after while mating with Mephistopheles she finally gave birth, the children of Lilith are called Lilin.

A succubus collects semen from the men she seduces. The incubi or male demons then use the semen to impregnate human females to create a demonic child in the mortal world. A succubus cannot be impregnated by a human male, but other demonic and mythical creatures can such as Satyrs, Centaurs, and Chimeras.

A succubus that gives birth to an succubus or incubus is considered of royal lineage and treated as a princess/prince. Usually children birthed by succubus are female, or hermaphrodite. Rarely are incubus, or male chimera, satyrs, or centaurs are born.

Hermaphrodite succubus are known to be very virile as far as breeding. 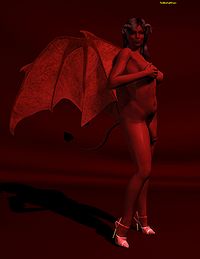 Succubi are usually very attractive woman in appearance albeit in human or succubus form. Usually these characteristics carry over in both forms except they are masked. The most striking of their differences is the color of their skin. A succubus as well as incubus appear in shades of Red, Green, or Blue. Their color determination depend on the factor of what demonic traits they carry over.

All succubi have tails with a spade like fan on the end. Some even have tails that can transform into a penis tip.

Succubi as well have horns usually on their brow. Th horns are usual of a ram, or bull which determines their dominance level as well. Some occasions horns sprout from the side of their heads as well as above the bridge f their nose on their forehead. Succubi born from succubus are considered princesses, and are born with no horns. These succubi wear a tiara.

They have long pointed elven ears as well, and have the ability of flight with wings. Wings come in two forms. Demon wings are built for power, and used when high lift is needed. Feathered wings are used for speed and maneuvering. Wings are usually hidden and can appear on will when a succubus or incubus requires them.

Eye color is the last characteristic difference. Most succubus have normal eye colors when human, but their eye color change when in succubus form. Queens and princesses always retain their eye color in human form. The color of their eyes is also a representation of their demonic abilities just like their skin. On rare occasions these colors could be different such as Gold eyes, and Violet skin.

Crusader & Excalibur display their skin color and their beauty

Seduction - Succubi can easily mesmerize human males and in most cases human females. This ability can only be defeated by someone with equal or greater demonic ability.

Hearing - Their hearing is increased to a level they could even hear a conversation on the phone up to 250 feet away.

Sight - Succubi can see excellent in the dark. Light tends to hurt their eyes.

Cloaking - A succubus can magically disappear by cloaking itself.

Flight - They can on will sprout wings for flight.

Retracting Claws - Their nails can extend and be used as a deadly weapon.

Cuffs and Collars are usually worn by all succubi in the mortal word. The cuffs are usually the color of their queens eyes. Lilith eyes are gold hence the cuffs and colors are gold as well. The Cuffs can be used as gauntlets able to deflect bullets and shield from attack. A shield can be produced by the succubi with them as well as weapons such as a sword, or battle ax. The collar is a tool that allows the succubi to enter the mortal world. It also aids them continuing their identities by hiding certain features such as a hermaphrodite succubi are usually female when human. The collar cloaks the penis as well continues their human existence as a female.

There are several types of succubi that are even less human yet exist as well. 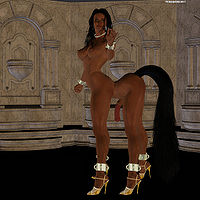 Ruffian is an incubus as well as a Centaur.

Every succubus is accounted for and must sign a contract. Contracts are drawn up for primarily use of a succubus ability to aid the demonic world. A succubus can remain non-contracted but their ability will be limited and they are unable to transform into a succubus, they also will be unable to sire a child from a mortal.

Contracted succubi usually work for a demon, or succubus queen who must collect sperm to seed other humans who souls are truly evil and must be brought to hell.