Stu Boling and the Lap Dance of Death (eBook) 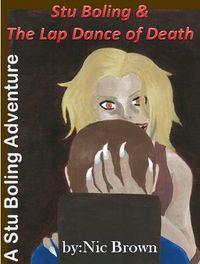 Stu Boling and the Lap Dance of Death is an eBook written by Nic Brown. It is the first work in the Stu Boling Adventures series by this author. In this work the character Starr is a Succubus.

Stu Boling is just a normal guy who wanted to grow up to be a policeman. That didn’t happen.

Instead he met an evil leprechaun that stuffed his head full of knowledge he shouldn’t have… knowledge of the world hidden within ours… the world of the supernatural.

Stu is just about at the end of his rope, unemployed and shy of prospects he’s hit a new low. But when a stranger comes knocking on his door things change. Soon Stu finds himself facing death in a most unlikely place- a strip club!

Stu is going to need more than a handful of dollar bills to get out of this one alive because at the Faster Pussycat strip joint the drinks are expensive, but a lap dance could cost you your life!

The following review was originally published by Tera on her Blog, A Succubi's Tale on July 18, 2017

Stu is in what you might call a complicated situation. If running into a leprechaun wasn’t bad enough, now there’s so much knowledge jammed into his brain that he suddenly knows that not everything as it seems. Opening his front door starts Stu on an adventure he didn’t expect, a pain in the ass boss that drives him batty, and a succubus that has only one thing in mind. Dinner.

The story tells about how Stu came to be in the situation he finds himself in, and that’s a really complicated mess of threads to sort through. It’s more so when Stu finds himself drawn into the world of the supernatural, having to use the knowledge stuffed into himself to work out what’s going on. The internal struggle really works well here, and the internal monologue reads well not just in telling the story, but giving rise to Stu’s personality.

There’s really no erotica in this work as the focus is getting Stu up to speed, pushing him towards his first encounter and seeing how things unfold from there. That story is direct and to the point, save for when Stu walks into a strip club, orders a Diet Coke, which as an aside, made me giggle, and then encounters Starr.

Starr, the succubus of the work, is for the most part stereotypical in what drives her. That said, her actual powers are a little different, she’s seductive as well which makes her more interesting. There’s a comment by her about what Stu’s mind thinks of as the perfect woman that offered I thought a good plot to follow on as well. There’s some subtle mind control, the seduction is told really well and I liked it quite a lot.

There’s a reveal about Starr, which wasn’t completely unexpected and in the same vein, how things clash between them, and what that says about Stu himself. This really brings into sharp focus the depth of his character. That climax however felt too rushed, there was too many new little things that appeared around Stu that didn’t before, and if felt like the author was cramming in a lot of minutia about Stu in a very short space.

The actual appearance of Starr in the work is rather short and as such this isn’t a work about a succubus overall. She’s more of a reason for a choice to be made, a path for Stu to walk on going forwards. The thing is, some of the comments by Starr make me wonder about her, and what happens to her and what could be.

The characters are really interesting, the dialogue turns some delightfully funny moments as well. But it felt, at the beginning, there was a lack of traction to get the story moving. There’s a fairly large infodump at the start which made reading those passages difficult because there wasn’t a lot of clarity. Once past that, and Stu acts as the person he is, that worked well. The encounter around, and within, the strip club worked as well. The ending was a little disappointing in how short and blunt it was. I’d have liked more about the mystery around Stu, the organization he’s encountered, and an inkling of what’s next.

There’s really not much done with Starr as a succubus character in this work overall. This is an origin story for Stu, a really good one as a whole, but things were somewhat scattered at times and I’d have liked s little more focus on things. There’s some dangling moments which leave many questions and they aren’t filled in all that well.

Since the work was published, I haven’t seen another work in the series, though it was recently given a new cover. If the series is going to continue, sometime, I find myself wondering if Stu’s really seen the last of Starr or not. Perhaps that would be interesting as an ongoing plot along the way. We’ll have to see I suppose…